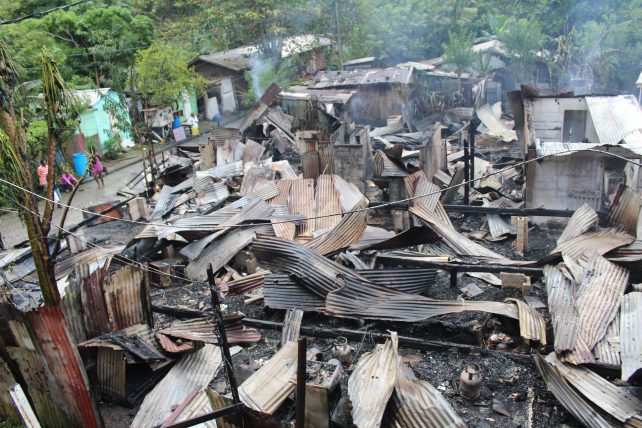 Eighteen families have lost everything and a total of 60 people have been directly affected in a massive fire that swept through a section of Silver Lake on Monday night.

No one was injured and MP for the area, Joshua Francis is now appealing to all Dominicans to assist those who have been affected by the blaze.

“What I have gathered in terms of people affected, it would appear that we have at least 6o people who were directly affected,” he told DNO on Tuesday morning. “We are looking at two long houses, each had a total of nine families, so you are looking at 18 families.”

He said among those who have become homeless are a significant amount of children.

“To me, they are in serious and urgent need,” he stated.

To make the matter even more urgent, Francis said the families of many of those affected are in Guadeloupe and have no one to turn to.

“So unlike some fire victim who can run to a neighbour, run by a friend, there are many of them who do not have the luxury and that privilege,” he said.

Urgent priorities include finding a place for those affected to sleep at, raising funds and finding clothes, food and other basic necessities.

“So I am taking the opportunity to appeal to the public to assist the Silver Lake people,” he noted. “They are in great need. They have lost everything. I am calling on the charitable organizations, whether Red Cross or not, to intervene and assist the people with a great sense of urgency.”

Francis said he called Prime Minister, Roosevelt Skerrit, last night concerning the blaze and to find out how the government could assist but did not get through.

“Unfortunately, I did not get a hold of him and that is understandable, it’s the holiday season and I called him quite late but I will be following up with officials within the government in seeking assistance for the people,” he said.

Meanwhile, Francis is calling for the Silver Lake people to unite following the tragedy.

“They have each other and no one suffered physical injuries,” he said, adding that they are suffering emotionally and will get counseling at some point.