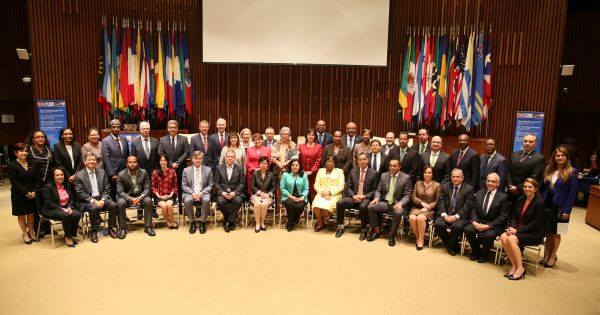 GREAT BAY, Sint Maarten (DCOMM) – The 55th Pan American Health Organization (PAHO)/World Health Organization (WHO) Directing Council that took place in Washington, DC last week ended with the approval of a series of new strategies and plans of action for eliminating HIV/AIDS, malaria and neglected infectious diseases and responding more effectively to Zika and other arboviruses.

Ministers of Health also approved measures for improving access to high-cost medicines; protecting the health of migrants; and strengthening health systems’ abilities to cope with disasters and other health emergencies.

Dr. Virginia Asin, Head of the Collective Prevention Services (CPS), a department from the Sint Maarten Ministry of Public Health, Social Development and Labour, represented Sint Maarten at the Council meeting that took place from September 26-30.

Ministers of health and delegates from PAHO’s 35 Member States adopted the following strategies and plans of action: A plan to accelerate efforts to fight HIV and sexually transmitted infections between now and 2020 so as to eliminate them as public health problems by the year 2030.

A plan to intensify malaria elimination efforts in the Americas over the next four years; a strategy for integrated control of arboviruses, a group of viruses transmitted by mosquitoes that includes Zika, dengue, chikungunya and yellow fever.

A new framework for integrated efforts to make health systems more resilient in disasters and health emergencies; a plan of action to eliminate eight neglected infectious diseases and to prevent, control and reduce the burden of five others over the next six years.

A framework for improving access to and use of high-cost medicines and health technologies, to improve care and ensure the sustainability of health systems; and a resolution calling for health policies and programs addressing health inequities that affect.

Also during the week, PAHO celebrated the 40th anniversary of PAHO’s disasters program and the 50th anniversary of the Expanded Textbook and Instructional Materials Program (PALTEX), which has facilitated access to medical textbooks for students and health professionals in 21 countries in Latin America and the Caribbean. Dr. Pastor Castell-Florit Serrate of Cuba was honored with the PAHO Award for Administration.

Minister of Health of Honduras Yolani Batres served as president of the 55th Directing Council after being elected by PAHO’s 35 Member States. Director General Margaret Chan of the World Health Organization (WHO) made what will be her last appearance before PAHO’s Directing Council before concluding her tenure at WHO’s helm next year.