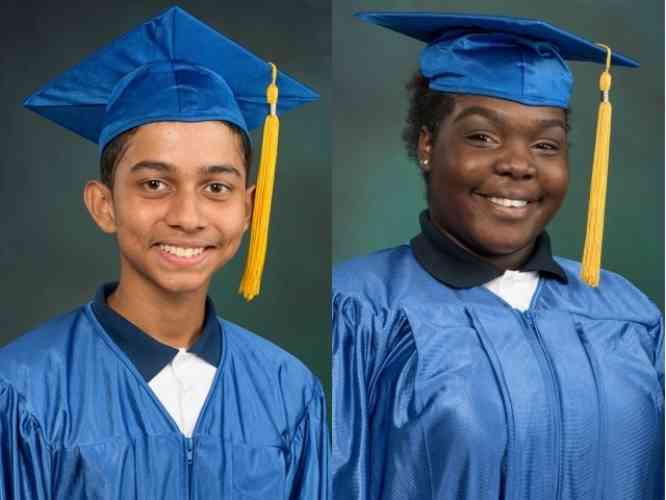 >Cul de Sac, St. Maarten  – Despite the hardships after monster Hurricane Irma, moving to a borrowed school building, and having fewer, truncated periods late into the evenings, St. Maarten Academy students were still able to beat the odds and surpass expectations to record 100% passes at the May/June Caribbean Secondary Education Certificate (CSEC) examinations. Once again, the school’s Mathematics average continues to top regional averages as well as those of other Caribbean islands.

Of the 83 candidates who sat the regional examinations offered by the Caribbean Examination Council (CXC), all of them secured school passes, while 98% achieved college passes, a six percent increase over the previous year.

Among the top performers were >Chetan Laungani and >Naomi Jankee, both of whom secured passes in 13 subjects; and >Habeebullaah Mohammed, Zacquel Phipps, Vishwadeo Persaud, Tania Narine, and >Sydney Williams, all of whom passed 12 subjects. >Ryana Anthony and >Chadalina Edwards also successfully passed all 11 subjects at one sitting.

Laungani, who wrote 13 subjects, attained Grade I passes in 11 CSEC subjects, seven with straight ‘A’ profiles. He secured these top passes in Additional Mathematics, Biology, Chemistry, Electronic Document Preparation and Management, English A, Human and Social Biology, Information Technology, Mathematics, Physics, Social Studies, and Spanish. He copped an A in Cambridge Dutch, and a Grade II in CAPE Communication Studies.

Jankee, who also wrote 13 subjects, secured nine CSEC Grade I passes, one Grade II pass, one Grade III pass, a Grade I in CAPE Communication Studies, and a B in Cambridge Dutch. She obtained Grade I passes in Biology, Chemistry, English A, Human and Social Biology, Information Technology, Mathematics, Physical Education and Sport, Physics and Social Studies, a Grade II in Spanish, and a Grade III in Visual Arts.

Phipps also performed laudably, writing 12 subjects, and securing seven Grade I passes and three Grade II passes at CSEC, an A in Dutch and Grade II in CAPE Communication Studies. His Grade I passes include English A, French, Information Technology, Mathematics, Physics, Social Studies and Theatre Arts, which he pursued under the instruction of Mrs. Arlene Halley of the National Institute of the Arts (NIA). He copped Grade II passes in Biology, Chemistry, and Human and Social Biology.

Persaud secured himself six Grade I passes and four Grade II passes for a total of 10 CSEC subjects. His Grade I passes were in English A, Human and Social Biology, Information Technology, Mathematics, Physics, and Spanish. He copped Grade II passes in English B (Literature), Biology, Chemistry and Social Studies. He obtained a Grade III in Communication Studies and a B in Dutch.

Narine, who wrote 11 CSEC subjects, obtained five Grade I passes in English A, English B, Mathematics, Information Technology, and Physics; Grade II passes in Biology, Social Studies, Spanish, and Human and Social Biology, a Grade III in Chemistry, and C in Dutch. Noteworthy, however, was her performance in Communication Studies. Narine, one of 13 Form 5 students to sit this examination along with the Year 1 CAPE students, topped the school’s merit list in the subject.

Anthony, meanwhile, secured four of her five Grade 1 passes with straight A profiles in Electronic Document Preparation and Management, English A, Information Technology, and Principles of Business. Her fifth Grade 1 was in Human and Social Biology, while her four Grade 2 passes were in Integrated Science, Mathematics, Social Studies and Spanish. Anthony, a business major, rounded off her 10 CSEC subjects with a Grade 3 pass in Principles of Accounts. She also copped a B Grade for Cambridge Dutch.

Edwards, too, wrote 10 subjects at CSEC and secured five Grade ones in Human and Social Biology, Information Technology, Principles of Accounts, Principles of Business, and Social Studies. Her Grade 2 passes were obtained in Electronic Document Preparation and Management, English A, Integrated Science, Mathematics, and Spanish. Her Dutch grade is a C.

Of the 23 subjects St. Maarten Academy offers at the CSEC level, all students must write at least eight compulsory subjects, as well as the Cambridge Dutch. For the first time this year, Physical Education and Electronic Document Preparation and Management were offered by the school, and both subjects attained 100% passes. Other subjects with 100% passes were Additional Mathematics, Caribbean History, English B (Literature), Human and Social Biology, Principles of Business, and Theatre Arts.

Among the top performing departments offering compulsory subjects to all candidates were Mathematics, which continues to attain passes above the regional average, and Information Technology. Both subjects secured 100% passes. The Department of Mathematics, headed by Alberick Arrendell secured 31 Grade 1 passes, 26 Grade two passes, 20 Grade 3 passes, and only six Grade 4 passes. This means that 69% of the students who wrote Mathematics copped Grades 1 and 2, and a total of 93% passed with Grades 1 to 3, well above the regional pass rate of 48%. Arrendell’s department also secured 100% pass rate in Additional Mathematics, taught by Olatunde Dalrymple. A comparison can be drawn with countries such as Grenada (39%), Guyana (43%), and Jamaica (50%), where students continue to struggle in Mathematics.

The Department of Information Technology, under the leadership of Julian Mason also secured 100% pass rate with 19 Grade ones and 48 Grade twos (81%), as well as 15 Grade threes. Only one student received a Grade 4.

Students scoring Grades I – III in five subjects are deemed to have met the matriculation requirements into most colleges and universities in the Caribbean and further afield. Grade I at the regional CXC examination is the highest accolade.

The phenomenal performance recorded in the May/June 2018 CSEC examinations were the end-result of the concerted effort of students,support of parents, and hardworking, self-sacrificing teachers, who despite devastating personal losses caused by Hurricane Irma, remained focused and dedicated to their craft.

Principal drs. Tallulah Baly-Vanterpool told teachers at the presentation of results last Friday: “We have some of the most dedicated teachers. Somebuilt bridges, and took a ladder to cross over and climb higher to meet their goals.” Shelauded the radical teachers who sneaked onto the academic campus, currently under construction, to meet with students before school. With the shift system and school starting at 12:30pm since January, many teachers at Academy sought ways to meet their students before school started in order to complete their syllabus. Others held classes on weekends.

“Their resilience and commitment under the most arduous circumstances played as significant a role to their students’ success as did their knowledge and presentation of content,” said Baly-Vanterpool.

As espoused by the school’s motto, St. Maarten Academy seeks to provide students with opportunities to not only learn, but also to excel and achieve.  It was against this backdrop that head of the English Department, Ms. Doreen Edwards, spearheaded an initiative which allowed thirteen of the candidates who had secured Grade I passes in English A while in the pre-examination class, to pursueCommunication Studies at the Caribbean Advanced Proficiency Examination (CAPE) in May/June, while simultaneously writing their CSEC examinations. Not only were all thirteen candidates successful, but six of them also managed to rank on the school’s merit list in the subject area.

The Board of the Foundation for Academic and Vocational Education (FAVE), under which the school falls, wishes to congratulate all students, their parents, teachers, and the Management team for proving in a year rife with setbacks, that with resilience, laser-focus, and commitment there is always a comeback; and what a comeback it was!