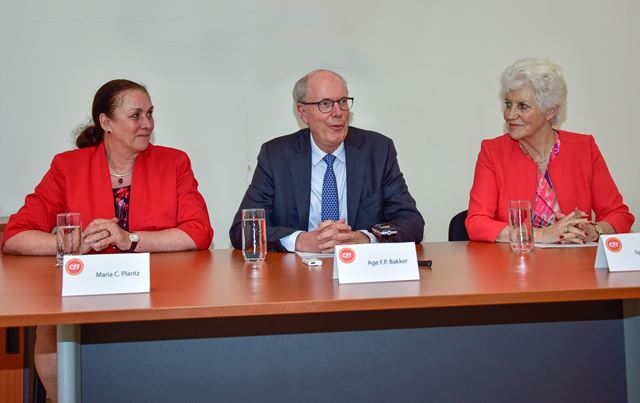 PHILIPSBURG – The board of financial supervision Curaçao and St. Maarten (CFT) spoke with ministers and Members of Parliament about the financial state of affairs during its regular visit to St. Maarten.

In 2016, St. Maarten realized a budget surplus for the first time since 10-10-10, in line with the targeted instruction (aanwijzing) to compensate for deficits in previous years. Precise results will become known once the annual account for 2016 is drawn up. The 2017 budget, which received a positive advice from CFT, will set further steps towards compensating deficits of the past and settling payment arrears, mainly with SZV and APS. CFT discussed with government the need to set clear priorities for capital expenditures within a loan of no more than ANG 30 million.

The approved budget 2017, totaling ANG 478 million, still has some caveats. Since the budget relies more heavily on incidental income compared to previous years, strict monitoring is necessary. CFT has asked government to realize the budgeted incidental income more early to avoid uncertainty later in the year whether the budget will be realized.

CFT advised a more structural approach involving a clear dividend policy regarding government-owned entities, to make the budget more sustainable and predictable for the future. Such dividend policies should take into account the strategic business plans of the entities, the required solvency ratios and their capacity to pay dividends.

The final quarterly progress report showed a budget surplus of ANG 26.4 million in 2016, which is ANG 1.1 million higher than originally budgeted. A significant amount of income, including a one-off payment by GEBE, was realized in the fourth quarter to make up for earlier shortfalls during the year. The surplus will largely be used to settle outstanding arrears. Due to difficulties with the financial systems the final result over 2016 can be subject to change.

CFT therefore advised government to finalize the annual accounts over 2016 as soon as possible and have them audited.

St. Maarten government provided CFT in February, with an update about progress made with the targeted instruction given by the Kingdom Council of Ministers (RMR) in 2015. CFT informed the RMR that St. Maarten complies with the instruction in a sufficient matter, so a request for a loan for capital investments will be possible. However, more insight in investment plans and proposed capital expenditures will be a prerequisite for CFT in order to review a future request for a loan.

Also, the government will have to prioritize budgeted capital expenditures within the agreed total loan amount of ANG 30 million, which will maintain the debt to GDP ratio at current levels. CFT also discussed with the Minister of Finance plans to modernize the tax office, including providing online services and fostering a culture of tax compliance.

The targeted instruction of the RMR also has asked St. Maarten to adopt legislation that will make the healthcare system and pension system financially sustainable in the future. A covenant has been signed by all concerned parties to reform the retirement system and raise the pension age to 65 years. This will also help APS to restore the cover ratio while keeping premiums at an affordable level. Relevant legislation is foreseen before the summer.

The drafting of legislation for the introduction of a national health insurance is well under way, although actual implementation may still take some time. CFT advised government about the importance of keeping all stakeholders properly informed.

CFT discussed with Post St. Maarten and government the need to draw up a clear action plan to restore financial viability for the company and reduce risks for the budget of St. Maarten.

In its discussions CFT had requested to make headway with processing the annual accounts over 2013, 2014 and 2015 by Parliament. In general, too little progress has been made on improving financial management.