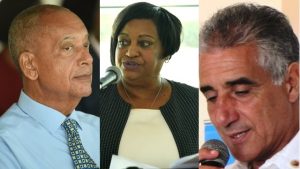 Philipsburg, St. Maarten – Although they have been ask to hand in their resignation, members of the Supervisory Board of Directors of the Princess Juliana International  Airport Operating company, PJIAE NV, are saying they not going home.  Instead, they busy putting their friends in position while the managing director, who according to her attorney, was suspended illegally, is on sick leave.

According to some members who are not in agreement with what is happening, the Board has decided to reappoint a staff as a legal counselor whose contract ended and went to work for one of the former ministers while there are qualified St. Maarteners who has applied for the position.

Another position that the Board is forcing management to fill with one of their friends is the Finance Director position.

“These guys behaving like Marcel and his ministers,” one person told 721 News. “They ain’ going home even after they tell them to leave, and they just doing as they please, putting their friends who ain’t from here in positions while it got St. Maarteners who can do the job.”

“This would have never happen when Ms. LaBega was there. These people just throwing the normal process of hiring staff through the window,” said one concerned employee who spoke to 721 News on condition of not being named.

Meanwhile, 721 News has learned that the Holding Company, PJIAH, is busy trying to fix the legal booboo it commit when it suspended Labega illegally over two weeks ago on St. Maarten Day.