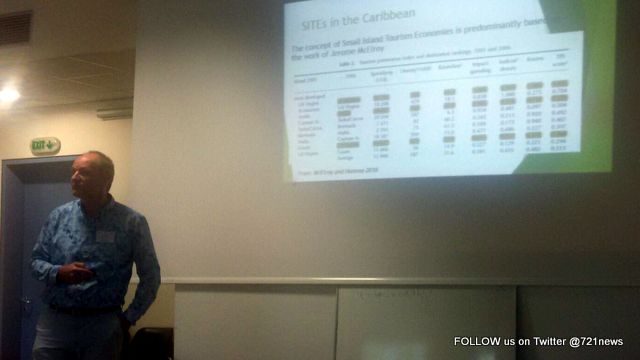 GREECE – Economist Arjen Alberts presented some of the findings of his research at the “Islands of the World” conference in Greece last Friday, May 27.

The main theme of his presentation was: “Resilience in Caribbean Small Island Tourism Economies” with a focus on St. Maarten, Aruba and the US Virgin Islands. This annual conference of the International Small Island Studies Association (ISISA) took place from May 23 to 27, on the Greek island of Lesvos. Some 150 participants from all over the world took part in this four-day event.

In his presentation, Alberts emphasized the exceptional characteristics of St. Maarten, Aruba and the USVI as islands that are extremely focused on tourism, even when compared to other Caribbean islands. Surprisingly, research shows that this specialization does not make these islands particularly vulnerable to external economic shocks. These Small Island Tourism Economies (SITEs) are in fact remarkably resilient.

As an example of a heavy external shock causing limited lasting damage, Alberts points at the case of the Natalee Holloway disappearance in Aruba in 2005. The negative publicity surrounding this tragic event indeed caused a number of tourists to stay away in the short-term, but the effect was only pertaining to first-time US visitors from the region close to Holloway’s home state. After ten months, no lasting consequences were visible.

On a household level, the economic resilience of the islands comes at a price. It turns out that the apparent lack of vulnerability is caused in part by many people working several jobs at the same time; having side-jobs or side-businesses. This strategy is known as “occupational multiplicity.”

The high cost of living drives individuals and families to work different jobs, and long hours to either pay for children’s education, build a house, support overseas relatives or simply to get by. On the positive side, this high intensity of employment also creates a short-term financial buffer against an economic downturn. When one job is cancelled, there is often an alternative to fall back on.

Another explanation for the economic resilience is found in migration. In favorable economic times, islands like St. Maarten, Aruba and the USVI expand their labor force through immigration. Conversely, when the economy contracts, many immigrants return home, especially those who recently arrived and those without an official status. This mechanism limits unemployment significantly compared to larger, non-island economies.

At an individual level, many island residents see migration as a ready and acceptable alternative when employment becomes scarce. In the US Virgin Islands this is true not only for recent immigrants, but also for US citizens themselves, who see migration to mainland US as a permanently available fallback option.

Alberts’ presentation is part of his PhD project with the University of Amsterdam, entailing a study into the socio-economic development model of Aruba and St. Maarten.

More information on the ISISA “Island of the World” conference is available at isisa2016.aegean.gr. The next ISISA conference will take place in Kangaroo Island, Australia, while the 2018 event will be hosted by the island of Terschelling in the Netherlands.