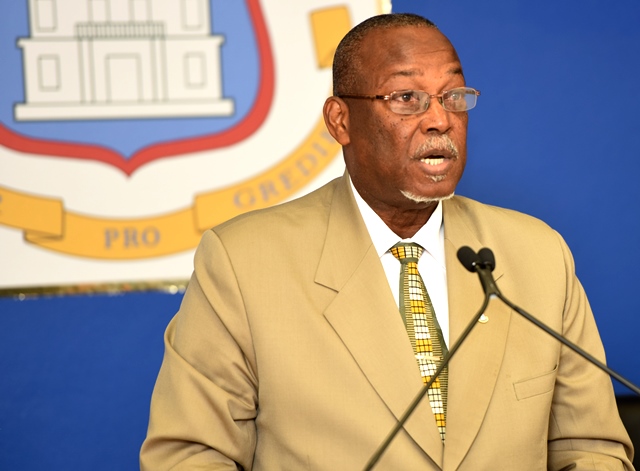 PHILIPSBURG – At Wednesday’s, February 15, weekly Council of Ministers Press Briefing Minister of Justice Raphael Boasman, delivered on his promise last week to “come with information pertaining to the police force in connection with the robberies and the situation at the prison.”

According to him, “The police have been very busy on many fronts implementing improvements as mentioned in their plan of approach for the police force. In spite of the many challenges they have managed to have great improvements for which I congratulate Chief Carl John and his team.”

“However, we all know the island has been plagued by some very violent robberies recently with the situation reaching the level of unacceptability. The population is worried and feel unsafe. The feeling of security must be restored to our community,” he continued.

Boasman clarified that he is not making any new plans to combat the situation, but is looking at all the plans already submitted, and has asked “all of the stakeholders involved and Police to come up with a synopsis from all of those things for an immediate solution on how we can deal with our situation.”

The main issue here is the capacity of the police force. “There are not enough police available to do all that has to be done,” Boasman said. He mentioned that newly recruited officers are now in training, however, “at certain times they are not available to be on the road, but they have to undergo those trainings otherwise we too would be in violation of their rights to those trainings.”

Boasman went on to outline a plan that has been put forward, which would entail the recruitment of 20 new officers. He stressed, “It was not a matter of finding locals who were willing to go into the force, it was just that there were no possibilities in hiring them because of all of the problems that we had.”

The other area that has his attention is the Justice Academy. “We have a Justice Academy where we are supposed to be training our local law enforcement officers and a lot is needed to be regulated there,” he said.

He met recently with the board of the Justice Academy, where issues identified would have to be rectified. However, “the Justice Academy is functioning,” and officers in the police force who could not further their training, are now receiving practical training.

Minister Boasman also alluded to crimes that have to do with cross border issues, and noted that “the Dutch and the French relationship is good that is going on, but more efforts will be made to improve on that relationship.” Although, “there is already a direct communication with each other, things like joint border controls and even joint patrols are being discussed.”

In regard to the automated information system, the implementation and finalization of such a system is imperative because “data can be registered better and be readily available for those who would have to investigate these crimes.”

“The police is of the opinion that especially with the recruitment that they would be in a better situation to mitigate what is happening out there…Those bad guys clearly have no regard for human property, or human life and that is a factor. That doesn’t matter really how many police officers you have. You really can do nothing about it. What you can do about it is to prevent more guys becoming like that, and that is a process,” Boasman stated.

Addressing issues at the prison, Minister Boasman first wished the inmate that had been injured in an incident at the prison well. “I wish him well, I wish his family strength, and I hope that he recovers from his injuries.”

“We have to normalize the situation at prison because it is not normal. Therefore the following has been decided. The Prison Director has been asked to take a leave of absence. But contrary to media reports, it was not immediately,” Boasman said. He clarified that the Prison Director was offered to accept a leave of absence, which he consented to.

In addition, “Two officials already in the justice chain will be assigned a responsibility to try jointly with the management team in the prison to restore order.” These officials will have support from a Human Resources official to tackle personnel issues at the prison; a Financial official to oversee the management of funds and provide financial accountability; and a Technical official who would be looking at all of the technical issues related to building a new prison.

“Then regular consultations between the parties to monitor what is going on would take place,” Boasman said. In a recent meeting with the Council of Law Enforcement, Boasman noted that a 3-4 month period would be needed to “normalize and then to deal with a more permanent solution.”