Home 721news Boasman: Priorities are very clear on what needs to be done 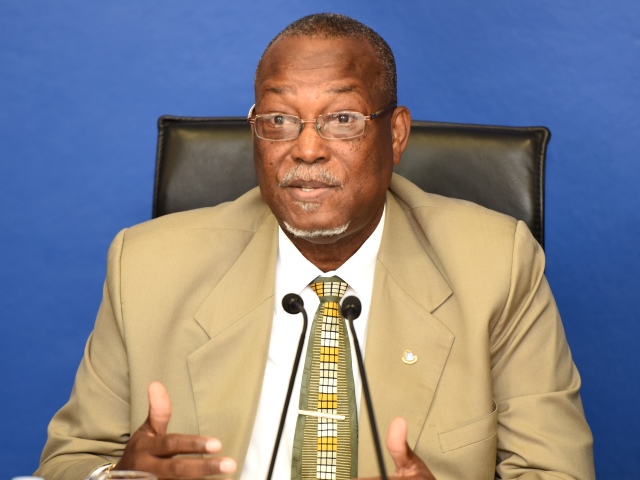 Last weekend, he had “discussions with the Chief of Police Mr. Carl John on the situation and early Monday morning I met with him, and the police management team to further discuss the situation. At that point I was presented with an immediate plan of action to deal with the situations with the robberies.”

Minister Boasman mentioned that there are other investigations that are taking place, and other actions that have been initiated like the search of the prison where a weapon was found.

“We discussed thoroughly the plan of action. And these crimes that are taking place because of the manner, the modus operandi in which they take place, and the violence that go along with it, they are labelled as ‘high impact crimes’ and have a very negative effect on the sense of safety and security within the community. This plan is a plan that I initially mentioned in the meeting of the Council of Ministers yesterday, and will come with a definite proposal for the implementation of this plan to the Council of Ministers latest Tuesday, and hopefully after discussing it we would be able to approve it and get some immediate action going. It is not like nothing is happening,” Minister Boasman said.

In addition, a large scale control is taking place on the Pond Fill, and Minister Boasman is scheduled to meet with the Insurance Association, and with the Merchants Association to further discuss possible plans of action.

“The police cannot do everything and all of us in the community would also need to evaluate the situations, and see what we can do to at least lessen or lower the risk of falling victims to these types of crime,” he said, promising that he would give an update on that meeting in the press briefing next week.

He also hopes to be able to present “what I would call an urgency plan” to the Council of Ministers, in which proposals are made on how to immediately start dealing with the situation at the prison to try to normalize what is going on there.

He couldn’t give many details, but did say that scanners had been acquired with help from a Dutch institution. In addition, other items like, “single beds, chairs, cabinets,” just to name a few, were shipped to St. Maarten in a container.

Boasman mentioned heightened security, better control of persons entering the prison, making repairs, as just a few things he hoped to improve at the prison. “As far as the accommodations are concerned, what we need is a new prison. That’s the bottom line. We can’t build that next week. So we would have to find ways to alleviate the situation that exists right now at the prison, and to avoid that St. Maarten be labelled as one of those countries where your prison falls below the level of internationally acceptable standards,” Boasman explained.

Minister Boasman also mentioned the use of container cells, as used in Bonaire, as a temporary solution while a new prison is being built. He promised to “keep you informed as to the progress of that.”

Minister Boasman also met with the board of the Justice Academy, “which I consider a very important institution. A lot of our problems have to do with manpower shortage and the proper training of the recruits. The idea is to create a training institution for law enforcement officials, but not only in government.”

The Minister mentioned the many security companies on the island, who hire workers with no training or experience. “This could be a problem for themselves as for the job that they have to execute. If we have a proper functioning Justice Academy that would be able to train people in law enforcement, maybe we can thinking on how we can also look at regulating the security company by requiring certification of those people who would be operating as security officers,” Boasman observed.

Together with the Education Ministry, the Justice Academy is working to acquire accreditation. Dr. Rhoda Arrindell, who is charge of this process, is finalizing all of the curriculum in technical part of establishing, and is finalizing establishment of the Justice Academy, which also needs to be put in an official structure, “which is not the case at this particular moment.”

Minister Boasman also had a meeting with the Progress Committee, which is the body that reports on the progress of plans of approach. He said, “That the meeting was positive. Their concerns are naturally that feeling that matters were not being dealt with the necessary urgency, and I assured them that all within our means that can be done will be done.”

“What we are doing is for the interest, and the safety and security of the people of St. Maarten, and the visitors that come to this island…Right now the priorities are very clear of what needs to be done,” Minister Boasman concluded.