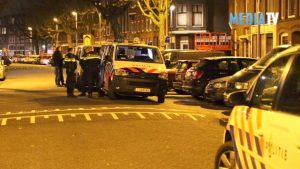 ROTTERDAM, Holland — Two men were arrested Wednesday evening in the deadly shooting investigation  that occurred in Rotterdam on December 10th.

Arrested are the 23 year old Rotterdammer and the 21 year old man from Lelystad. The suspects were arrested at a home in Soesterberg. The homes of both men was also searched.

The detectives believes that both men were in the house  at Burgermeester Meineszlaan (Mayor Meineslaan street) the night of the fatal shooting.

In this house 2 weeks ago the dead body of a 39 year old man Rene Francis Paul aka Kobie was found, also a 23 year old from ST.Maarten who lives at the house was wounded.

Buying of a crane truck
The 23 year old laid Thursday evening   December 10th wounded in front of his house. In his house laid the body of the victim 39 year old Rene Paul. The victim resided at this address since December 6th he was in the Netherlands to buy a crane truck.

From investigations it can be concluded that the person living at the home opened the door for the two suspects.

arrest were made possible by 3 tips that came in after the case was aired on the crimestoppers program “Opsporingsverzocht” on Tuesday last.
The 23 year old St.Maartener Geraldo who Paul was residing by since December 6th is still in critical condition at the hospital.
According to the police spokesperson, communication with him is extremely difficult.