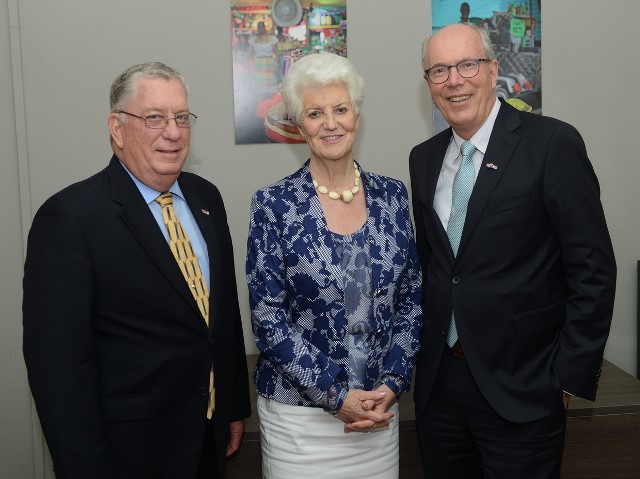 Oranjestad, Aruba – During its visit to Aruba on September 28 and 29 the Board of financial supervision Aruba (CAft) advised to ensure by means of a 2016 budget amendment as announced by the government as well as a Modification Memorandum, that the 2016 and 2017 budgets will remain within the deficit norm in conformity with the National Ordinance on temporary financial supervision (LAft). This in light of the economic growth figures that are lower than previously expected. Recent Aruba Central Bank figures show that both the real and the nominal economic growth have been stagnant for some time. The promised 2016 budget amendment will have to offer deeper insight as to how far the positive effects of the re-opening of the oil refinery shall compensate the negative effect of the adjusted income growth. The Board has taken notice that the recommendations of the CAft and the Advisory Council for a downward adjustment of the income figures in the 2017 draft budget will have to be further observed in the Modification Memorandum. In its final advice on the adopted 2017 budget the Board shall evaluate whether this budget is in compliance with the LAft norms.

During the visit of the CAft to Aruba the Board met with the Governor, the Minister of Finance and Government Organization, the Council of Ministers and the Parliamentary Committee on Finance, Economic Affairs and Government Organization. Amongst others the execution of the 2016 budget, the state of affairs with regard to the draft 2016 budget amendment and the draft 2017 budget as well as the forthcoming re-opening of the refinery were discussed. The Board also visited the General Audit Chamber.

In its reaction on the execution report on the realization in the first six months of 2016 Cft has indicated that based on the figures provided, Aruba appeared to be on schedule to comply with the LAft-norm as per the end of 2016. At the same time the Board found that the realization in the first six months of 2016 was mostly due to windfalls resulting from the payments on the returns of profit tax (VAS), which was introduced end 2015, while the income from other forms of taxes was lagging behind. The progress of the government income therefor was – together with the refinery – one of the main subjects of the talks the Board had on Aruba. Also the savings in staff costs which are falling behind require a targeted approach in the opinion of the Board, as this constitutes a significant impediment in achieving sustainable public finances in the long term. As a consequence of the downwardly revised GDP figures the debt ratio has raised in 2016 to up to 86% of GDP due to the so-called denominator effect. This again underscores the need to persist in the agreed improvement path.

According to the agreements reached the CAft will soon receive the draft 2016 budget amendment, in which the financial and economic implications of the reopening of the refinery as projected by the CBA are accounted for and explained. It was also agreed that the Board additionally will receive a financial risk analysis performed by Aruba in order to identify the short- and long-term risks which the reopening of the oil refinery may represent for the budget. Furthermore, the government has put in motion a process to prepare an environmental impact report. It is expected that this process will take some time.

In recent months, both the CAft and the Advisory Council have issued their advice on the draft 2017 budget of Aruba. The legally stipulated term for the submittal of the draft budget to Parliament – prior to September 1st – was met. Because of the timely submittal to Parliament, it is expected that the adopted 2017 budget will be submitted to the CAft in accordance with the provisions of the LAft, which is not later than December 15th, 2016. During its visit to Aruba, the Board has advised the government to adjust the 2017 budget in view of the downward adjustment of economic growth rates of 2015 and 2016 by the CBA. The CAft expects therefore that the size of the Aruban economy will be about AWG 5.0 billion next year, while the draft 2017 budget assumes a size of over 5.3 billion AWG. This means that the estimation of the government revenues was too optimistic, as the Board already set forth in its previous advice. The CAft will issue a final opinion on the 2017 adopted budget, in which it will assess whether this meets the standard maximum deficit of 0.5% of the projected GDP for 2017. Without further adjustment it is unlikely that the Board will be able to give a positive assessment.