By The Daily Herald / Sport 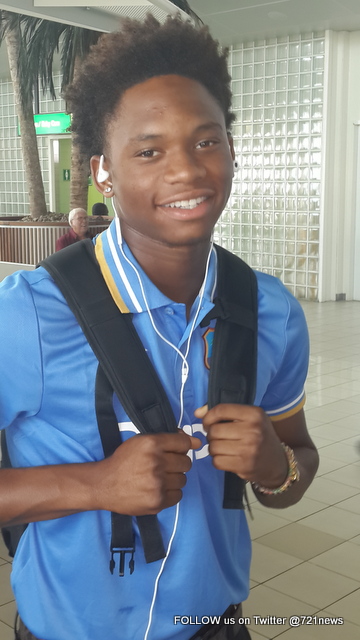 Keacy Carty has been selected in the West Indies U19 team for the ICC Youth World Cup in Bangladesh.

CUL DE SAC, Sint Maarten — St. Maarten’s first and only West Indies international cricketer Keacy Carty has been selected in the West Indies U19 team for the ICC Youth World Cup in Bangladesh.

The Youth World Cup begins on January 19. Carty returned home yesterday and was greeted at the airport by Minister of Education, Sports and Youth Affairs; Sylveria Jacobs, Sports Coordinator; Johnelle Richardson, his proud and happy parents; Keith and Angela Carty and his number one fan Bert Dupie and other well-wishers.The former Milton Peters College student along with other members of the West Indies U19 team was in Grenada for their final training sessions over the last seven days.
Carty became a household name in the region when he topped the batting aggregate for the regional U19 four-day tournament in Guyana in 2014. That tournament comprised teams from the Leeward Islands of which he was a member, Windward Islands Guyana, Trinidad and Tobago Barbados and Jamaica.

Since then he has been scoring heavily at all levels of regionally cricket including the local league.

His father, Keith Carty who is an ardent cricket fan is especially pleased with the achievement of his son. He personally coached his son on a daily basis at the cricket field. Both father and son on numerous occasions could be seen and heard discussing technically and mental areas of especially batting during a match or during practice times. Keacy is a respectful learner and would listen to his dad and follow his advices.

In an invited comment, he stated, “I feel good knowing I’ve been rewarded for the hard work I’ve put in but the journey doesn’t stop here, it has only begun. I have to try and carry my past performances into the world cup to make my region proud and have an impact on the tournament and see where God takes me from there.”

A release from Cricket St. Maarten stated: Keacy Carty: Cricket St. Maarten is extremely proud of your achievement in being selected to be a member of the West Indies U19 team. It was your determination to succeed has brought you thus far and could take you further in cricket and life. You are about to fly St. Maarten flag for the world to see; letting the world know that cricket is alive and well here. We give you our full support and wish you all the best both now and in your future.

The members of the full team which will represent the West Indies in Bangladesh are from the Leeward Islands; Keacy Carty and Alzarri Joseph, from Guyana; Kemo Paul, Tevin Imlach and Shimron Hetmyer, from Barbados; Shamar Springer, from Jamaica; Odean Smith, Michael Frew and Shahid Crooks, from Trinidad and Tobago; Kirstan Kallicharan and Jyd Goalie, from Windward Islands; Obed Mccoy, Gidron Pope, Emmanuel Stewart and Ryan John.

The West Indies U19 team is scheduled to leave on January 6.