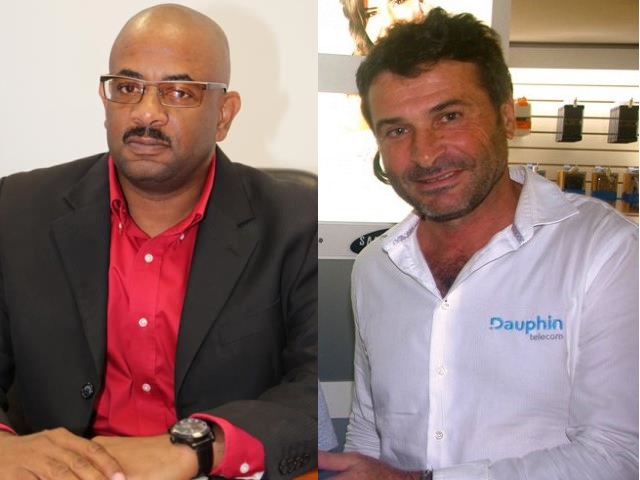 ~ UTS has a backup plan in place; Why doesn’t TelEm?~

PHILIPSBURG – CEO of Dauphin Alain Haillant set the record straight after a press release was issued by TelEm’s Chief Technical Officer (CTO) Eldert Louisa informing the public that TelEm had a plan in place with Digicel.

Haillant said in a comment posted on SMN-News website that it is thanks to Dauphin that Smitcoms got the opportunity to connect to the Digicel’s infrastructure in Marigot, and it was done via Dauphin’s Telecom network interconnection.

“You forgot to mention to the press your partner Dauphin Telecom, who worked hard yesterday (Sunday Dec 18) to allow Smitcoms to access to Digicel’s infrastructure in Marigot through Dauphin’s Telecom network interconnection. Without Dauphin’s action to interconnect you with Digicel, there will be no internet for TelEm subscribers at this present moment,” Haillant said.

“Your partner always in the past, like yesterday, acted promptly to help TelEm group to restore its services. We like to help our partners. One island, one network,” Haillant continued.

With this numerous internet data island-wide black-out, it has again shown that TelEm does not have a plan B for a situation like what happened early Sunday morning, December 18. According to information reaching 721news, on Sunday the CTO rushed to get help via the French side and use it as an alternative solution.

In a Press release dated October 2011: Louisa said “while the backup telecommunication link provides a level of comfort for St. Maarten’s business and residential community, the possibility of a major blackout of telecommunication services still exists if the SMPR-1 cable is cut further out at sea”.

In the same Press release dated October 2011 Telem CTO Louisa warned: “We can assist each other with an overland connection if the broken section is at either of the shore ends, but we will be left without telecommunication connection to Puerto Rico if the main cable is cut or damaged along its length,” warned Mr. Louisa.

Back in 2011 he said the situation calls for a second cable connecting St. Maarten to the U.S.A. mainland. At that point in time he suggested that it is possible if the Dutch-sponsored the undersea cable that was being proposed in 2011 for the BES islands.

Now in Dec 2016 five years after Louisa fail to put a plan for a second cable in place in case if the SMPR-1 cable is cut further out at sea !!!

The data outage caused a number of problems on the island. Many businesses that depend on internet like the bank credit card machines, and customer online banking were affected. St. Maarten Harbour felt the effects, and the Princess Juliana International Airport (PJIA) saw massive congestion as affected customers tried to make their flights.

721news must also point out that PJIA also failed to have a Plan B in place for cases like this. Hundreds of people were stuck at the airport for hours, and some flights were delayed because no internet connection was available to facilitate the check-in process.

721news understands that the airport had requested help from UTS, but systems were still inoperable. Because of the security system PRITA, the check-in system did not recognize UTS as one of the internet providers. This system is put in place by PRITA to protect from hackers, and prevent other security breaches.

A source told 721news that this problem could have been avoided a long time ago if CTO Louisa had followed a proposal, and invested in a second international data cable like UTS. There are other issues in the Technical Department, like calls and data, which drop occasionally all over the island. However, fixing those breaches has not been prioritized. The TelEm Tech Dept. needs to invest in certain equipment, and execute different reports. However, seemingly such moves are hampered by CTO Louisa.

On Sunday, 721news contacted Louisa to get more details on what was happening. However, he did not give us the opportunity to finish our question. He brushed off questions by saying he would contact 721news “when he have time.” Up to Monday evening, December 19, 721news had not received a call back from Louisa. 721news finds this very disrespectful as the public needs to be timely informed about this crisis presently taking place on the island.

721news contacted Chairman of the current management team Helma Etnel, who gave her full cooperation. She also contacted spokesman Joe Dominic to assist us, however, he was too busy to answer our questions. Dominic was more concerned about us disturbing his private lunch. After an hour, he contacted 721news to brief us with some information, but we were still rushed off the phone.

721news must emphasize that an island-wide data black-out took place, and the business community, and thousands of customers from all other internet providers Dutch and French, were depending on hearing official word on what was happening. In a case like this, customers expected proper and structured information, via some sort of communiqué, so they could decide what action to take. Customers should not have to wait till 9:00pm in the night to be informed.

Below you can read the post that Haillant wrote, addressing TelEm CTO Louisa, who took all the credit for him and his team:

Mr. Louisa,
You forgot to mention to the press your partner Dauphin Telecom, who worked hard yesterday to allow Smitcoms to access to Digicel’s infrastructure in Marigot through Dauphin Telecom’s network interconnection. Without Dauphin’s action to interconnect you with Digicel there will be no internet for TelEm subscribers at this present moment.
Your partner always in the past like yesterday, acted promptly to help TelEm group to restore its services. We like to help our partners. One island, one network.
Sincerely,
Alain Haillant
CEO Dauphin Telecom, Saint Martin