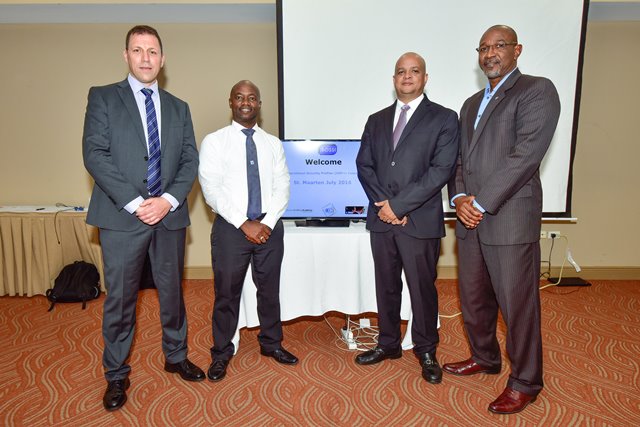 PHILIPSBURG – A total of 17 individuals from a cross section of public and private organizations, participated in a certification training course for Operational Security Profiling (OSP).

This training, which was designed to assist security professional on how to predict possible threats, was organized by the St. Maarten Chamber of Commerce. The trainers are certified Operational Security Profiler OSP® facilitators.

Predictive Profiling is a methodology that started in Europe, based on a mix of strategies and preventive measures used by Israeli security agents to identify potential terrorist and/or criminals in crowds.

Many organizations in the Netherlands, such as Schiphol Airport, Banks, Hotels and Train Stations are using Certified Operational Security Profilers, which has been proven to be a very effective preventive risk management measure and tool. Due to the sensitivity and nature of this training, the Chamber opted not to disclose those who participated.

With the recent increase in terror activity around the world, which has in recent times threatened some Caribbean islands, the St. Maarten Chamber of Commerce considered it important for the country’s key stakeholders to be prepared and equipped to identify potential threats.

The three-day training session was held at Divi Little Bay Beach Resort, and representatives from the Banking Industry, Telecommunication Industry, the Air and Sea-Ports, the Justice Academy and Private Security organizations participated. Each successful participant will receive a certificate, and will be registered in the N’ Lloyd registry as an OSP®. Only registered members can carry the title of OSP® behind their family names.

The participants were exposed to proven and developed techniques on how to identify suspicious behavior, understand the various components of a potential terrorist, the role and responsibilities as a profiler, gathering of critical information and what to do with this critical information.

The Chamber will organize additional OSP certification courses along with the advance profiling course in the near future.