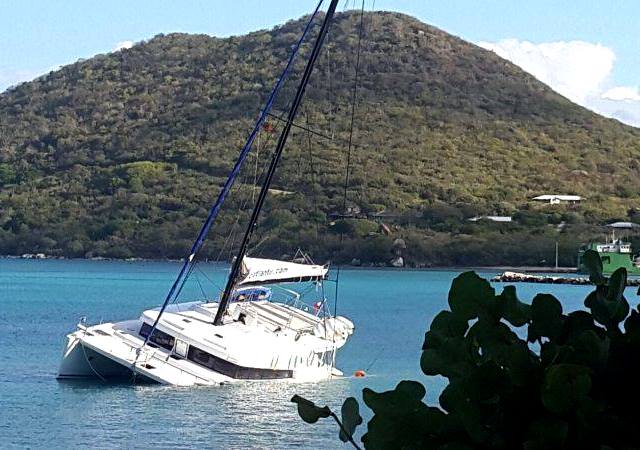 VALLEY, Virgin Gorda, VI- The charter boat that sank in shallow waters off Fischer’s Cove in Virgin Gorda on Sunday February 26, 2017 had sailed from St Martin with passengers on board.

And according to Coordinator of Virgin Islands Search and Rescue (VISAR) J. Phil Aspinall, the boat was actually taking in water and the captain deliberately took the vessel to the shallow area as a result.

“The boat was taking on water and he (captain) stopped it there to save himself before he sank. So he didn’t hit anything there at all. He was already sinking apparently. He knew the territory and he chose to go there and sink in safe water…” Mr Aspinall told our newsroom.

All the passengers on board the vessel were unharmed and have since departed for St Martin while the skipper stayed behind to find out what went wrong with his boat, according to information reaching this news site.

The boat was salvaged and taken to Nanny Cay boatyard.

What reportedly seems to be a frequent occurance in that area, a charter yacht grounded and began to take in water off Fischer’s Cove, Virgin Gorda on Sunday, February 26, 2017.

From all accounts, no one was hurt.

It is unclear at this time how the vessel ended up in that shallow area.

Virgin Islands Search and Rescue Coordinator J. Phil Aspinall could not give any details when contacted but said vessels grounding in that area has been frequent.

He said the area is shallow to the extent that persons often walk to shore.

“Groundings happen that side in Fischer’s Cove all the time. It’s a regular thing. It’s on the chart but people just miss it,” Mr Aspinall said.