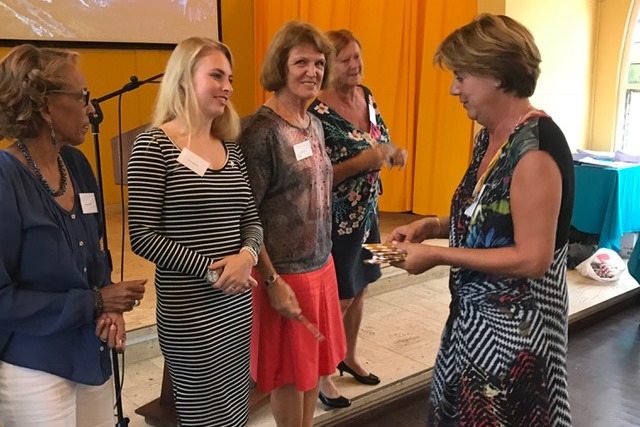 ARUBA – During the working conference: “Dutch as a foreign language,” which was held in the Auditorium of the University of Aruba on November 23, participants took an important step towards a Caribbean Network for issues on language policy, materials and professional development of Dutch as a Foreign Language (NVT).

The Dutch language is a hurdle for most students in the region. This often has to do with the fact that Dutch is still taught as a mother tongue, using materials in the Dutch context, whereas Dutch is a foreign language for the students.

Though many initiatives have already been started on the islands of the former Netherlands Antilles with regard to the above, often there is no awareness of other’s good practices. Therefore the objective of this conference was to make a start in joining forces for the improvement of Dutch education, and teaching the Dutch language in a manner that will not hinder development of the students.

Marjan de Visser-Lemstra opened the conference with a brief explanation of the various settings for using Dutch. Her inventory of the state of affairs of NVT in the Caribbean was the reason for this conference. The survey took place on the six islands of the Kingdom and was funded by the Ministry of Education (The Netherlands) and “Taalunie” (Dutch Language Union).

Annemarie Proveyer, Director of the Directorate of Education Aruba, welcomed the approximately 70 participants and emphasized the importance of cooperation.
Eric Mijts of the University of Aruba was the keynote speaker, and he called for developing material in order to optimize Dutch as a foreign language in education. He pointed out that methods used for learning other foreign languages work. Attention needs to be paid to the further professionalizing of schoolteachers in the use of NVT-specific materials.

After the keynote speech, Marjan de Visser Lemstra elaborated on the inventory she conducted for NVT on the six islands. She elaborated on Dutch used as the language of instruction. Topics were: language policies, didactics, materials, practices and experiences with NVT education. The aim of the survey was to provide input for focusing on an NVT network in the Caribbean where ideas on language policies and developing materials can be shared. This network can also be a network for common professionalization.

In the afternoon there were five short presentations of the best practices from the different islands: Angela Dekker, transition coordinator for St. Eustatius; Hetwig Kuiperdal gave a presentation on the NVT-method used in kindergarten and elementary schools in Aruba; Petra van Gent, Dutch language teacher on St. Maarten, highlighted the importance of a structured approach to the provision of NVT-education; Femke Neunzig, elementary school teacher in Saba; Suzanne Dings and Nicole de Weert, both Dutch language teachers at Colegio Arubano, closed off the “good practices” presentations.

Four groups, representing those who are needed to make changes from “mother tongue education” to NVT-education, concluded the afternoon with a discussion, which included: policy makers, decision makers, NVT-experts and informants. In the plenary discussion it was decided to immediately start a platform for exchanges and cooperation. During the meeting, the Facebook page “NVT in the Caribbean” was created.

Source: 721 News Conference “Dutch as a foreign language” indicates a need for more