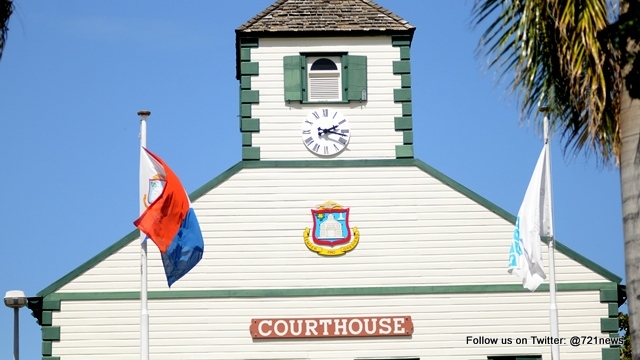 GREAT BAY – Todrick Kahim Flemming had stories to tell about his soon to be ex-wife in the Court in First Instance but they did not save him from a conditional 2-week prison sentence, 50 hours of community service, mandatory anger management training and mandatory treatment at Turning Point for alcohol addiction. During the 2 years of probation the court imposed, Flemming is also under supervision of the probation office.

The 42-year old former VKS-officer was sentenced for hitting a woman with a full bottle of cortez rum during a dispute over money and for ill-treating his wife on several occasions between 2011 and 2014. The court considered the hit with the bottle proven, but it dropped two of the four charges of ill-treatment.

To Flemming it was all like a bad dream. “I am broken,” he said at the end of the trial. They have lied about everything; it is scandalous what they did to me. I don’t get it. Will I still have a chance to return to the VKS? They have kicked me out.”

That final statement did not differ much from other observations the defendant made. When he hit an elderly woman with a rum bottle, he claimed it was self-defense because the woman had hit him first. The court did not buy it.

A witness told the police that the defendant had been extremely drunk and that he was on top of the woman when he hit her. “The witness is lying,” Flemming said. “I was assaulted first. People in St. Peters know who this lady is. She is very aggressive and obstinate.”

The defendant was also accused of assaulting his wife who is now seeking a divorce. On two occasions he grabbed her by the throat, once he hit her in her belly while she was pregnant and once he threatened her with a knife. Flemming denied the last two charges and in the end the prosecution and the court found that there was insufficient evidence to sentence him for it.

“My wife is making up stories. She is a good actress,” the defendant claimed. “And I am not aggressive. I am a cool and collected person.”

One of the arguments between the defendant and his wife was about the children. “I am the head of the family,” the defendant said. “If I correct the children, she goes against it. She is making up these stories so that she could go to Safe Haven.”

The defendant also claimed that his wife had assaulted him on more than one occasion. “But I never went to the police about it.”

It appeared that the women later wanted to withdraw her complaints against her husband, but the prosecutor’s office decided that the man had to give account for his actions in court. “I was under a great deal of pressure,” he said apologetically. “There were financial troubles and there was disrespect. She could continue for hours with an argument.”

Asked if he needed help to bring his aggression under control, the defendant repeated that he is not aggressive.. “But I will do training if the court finds this necessary.”

Flemming said that he has in the meantime regulated his alcohol consumption to more acceptable levels.

The public prosecutor noted that the defendant puts the blame elsewhere. “He does not take responsibility and he claims that his wife and the witness are lying.”

Attorney Geert Hatzmann said that the truth of all the stories probably lies somewhere in the middle. He noted that there is a cultural element to the dispute: Caribbean machismo. “His wife does not listen to him and then he feels insulted. That does not make it alright though.”

Hatzmann said that asking a prison sentence after the case had been stalled for so long was a bit too much.

The judge considered proven that Flemming had grabbed his wife on two occasions by her throat and that he had hit the other woman with a run bottle. “The other incidents could very well have happened but there is not enough evidence. This is ill-treatment against a cultural background, but you also have to take responsibility for your behavior. And you don’t realize that.”