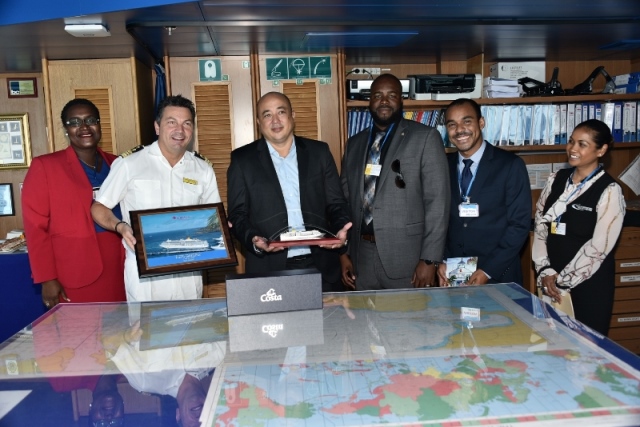 PORT ST. MAARTEN – Costa Deliziosa made its inaugural call on Thursday, March 23 to the destination, prior to making its Atlantic Ocean in a few days.  To greet the vessel and exchange the customary plaque and welcome pleasantries were representatives from Port St. Maarten Management, the Cabinet of the Minister of Tourism, Economic Affairs, Telecommunications and Transport (Ministry TEATT), the St. Maarten Tourist Bureau, and the ship’s agent S.E.L. Maduro & Sons.

Captain Severino Palomba welcomed the delegation onboard.  Palomba said he was very pleased with the destination, especially Philipsburg where passengers can find everything in close proximity of each other such as duty-free shopping, restaurants, the beach, and watersport activities.

Captain Palomba added that Sint Maarten is a port of class and elegance.  He was also very pleased with the port facilities which allowed for seamless docking on Thursday morning.

Mingo also pointed out that he appreciated the support given by the Cabinet Ministry TEATT and the Head of the St. Maarten Tourist Bureau Rolando Brison.

Costa Crociere SpA, an Italian company based in Genoa, comprises the brands Costa Cruises and AIDA Cruises. It boasts the largest fleet among all European operators, with a total of 25 ships in service.  It is part of the group Carnival Corporation & plc, the world’s largest cruise operator.

Costa Deliziosa carries mainly European passengers on European itineraries from Italy, France, Germany, Spain, Portugal and the United Kingdom, and about 10 per cent from North America.  On Caribbean cruises, the demographics are still geared strongly toward European travelers along with North Americans. Costa’s ships also appeal to a wide range of ages, from 20-something first-time cruisers to retirees, but it’s fun, active vibe attracts a strong family audience as well as 40-something (and younger) couples.

Costa Deliziosa was ordered in 2007 from Italian company Fincantieri. The keel was laid down at the company’s shipyard in Ancona. In July 2008, after the keel and first section were completed, they were towed to the Marghera shipyard for further work.

The Deliziosa was launched on 12 March 2009, when water was admitted to the dry dock in which she was built. The ship was handed over to Costa Cruises on 31 January 2010 at the Venice Passenger Terminal.

Costa Deliziosa is the third ship to be delivered by Fincantieri to Costa Cruises in a nine-month period, and one of five new ships to be in service with the company by 2012; a 50 percent expansion in the fleet’s passenger capacity at that time.

The cruise ship is a hybrid design: taking the best elements from the Vista and Spirit class cruise ships. Costa Deliziosa is 292 metres (958 ft) long, with a beam of 32.3 metres (106 ft).

Costa Deliziosa next port of call is Antigua & Barbuda prior to making the Atlantic Ocean crossing to Tenerife, Canary Islands and then on to mainland Europe.