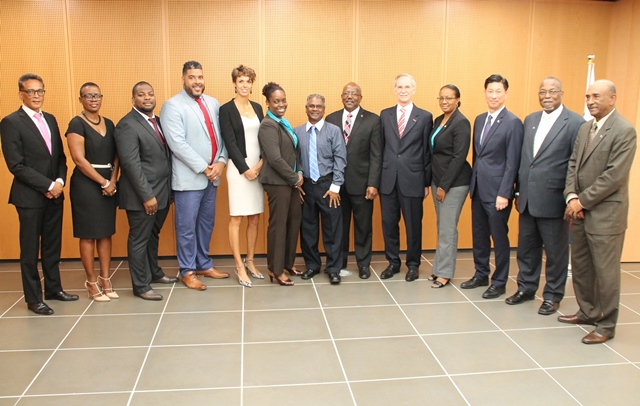 PHILIPSBURG – During National Health Week: January 23-26, several meetings with various stakeholders were scheduled by the Ministry of Public Health, Social Development and Labour.

This included sessions with the Social Economic Council (SER), the Council of Advice, the Council of Health, Parliament, as well as a two-day session for invited stakeholders.

On Tuesday, January 24, the Council of Ministers was briefed on the matter of National Health Insurance (NHI). To learn from other countries’ experiences, Minister of Health Emil Lee invited several experts in the field to discuss the topic at hand from different angles.

After introductory remarks by Minister Lee and Fenna Arnell, Department Head of Public Health, the experts, which included Professor Wynand van de Ven, Professor of Health Insurance at the Erasmus University; Researcher Stanley Lalta from the University of the West Indies (UWI) and Anco Ringeling of AZV Aruba, each gave their point of view on National Health Insurance and the process leading up to it. The meeting resulted in an interactive and informative session with the ministers present.

Though the main topic of discussion is the NHI, which is interconnected with National Health Reform. The significance, complication and the far-reaching impact of the issue is well understood by the Council of Ministers and the Ministry, yet as a result of the instruction of the Dutch Government to contain St. Maarten’s expenditures on health care, the Government is committed toward the national health reform initiative, which will be rolling out over the course of the next four years, one of which will be the implementation of NHI.

The organization of various consultation sessions for stakeholders to provide their input is therefore of utmost importance, said Arnell.

The aim of the National Health Insurance Week is to share knowledge and lessons learnt from other countries as well as to gain more insight from stakeholders as to how they envision a national health insurance program on St. Maarten. One of the critical decisions that needs to be decided upon is whether St. Maarten should apply a single insurer or multi-insurer model.