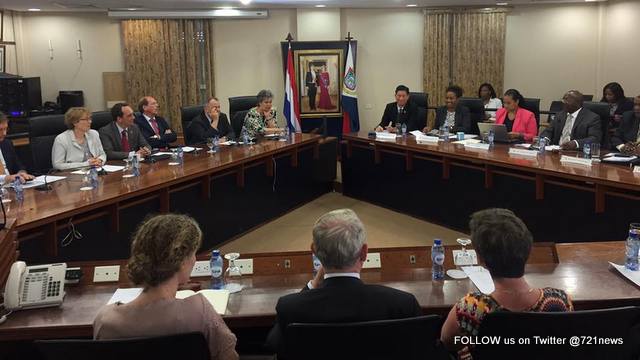 PHILIPSBURG – The Council of Ministers of St. Maarten met with the Delegation of the First Chamber of the Netherlands, this afternoon, Friday, April 22.

The purpose of the first official meeting, between both parties, was to bring the First Chamber up to speed on the challenges that Country St. Maarten has faced since 10-10-10, and to discuss the current political and socioeconomic situation of St. Maarten.

Despite a challenging start, Prime Minister explained that St. Maarten has managed to implement institutions, such as the Council of Advice, the Ombudsman, the General Audit Chamber, all of which have produced good work. These institutions were made possible predominately due to funding from USONA.

The First Chamber delegation leader Prof. dr. Ruard Ganzevoort, continued the discussion by asking what is needed to get Country St. Maarten to where it needs to be, and how The Netherlands could potentially assist. Prime Minister Marlin explained that political stability is very much needed, in order for action plans to be properly executed. As a result of five different Governments in less than five years, it has caused action plans to be abruptly stopped and leadership directions to be constantly changed.

This is counter-effective for the growth of Country St. Maarten. Therefore, the Prime Minister briefly explained the Electoral Reform and the importance of it, to the First Chamber. He explained that although the Dutch may be skeptical and resistant about the St. Maarten Government changing a constitution that is over 200 years old, for a country that is only 5 years old, the political situation of St. Maarten cannot be compared to that of Holland.

He further explained that it takes only one “ship jumper” to force a change of government in St. Maarten, whereas in The Netherlands, that is not the case. Prime Minister Marlin, therefore asked that the Dutch Council of State not evaluate this change of constitution from a Dutch point of view, but to look at it as a serious problem that St. Maarten needs to fix, in order to ensure stability.

Source: 721 News Council of Ministers meet with First Chamber of the Netherlands