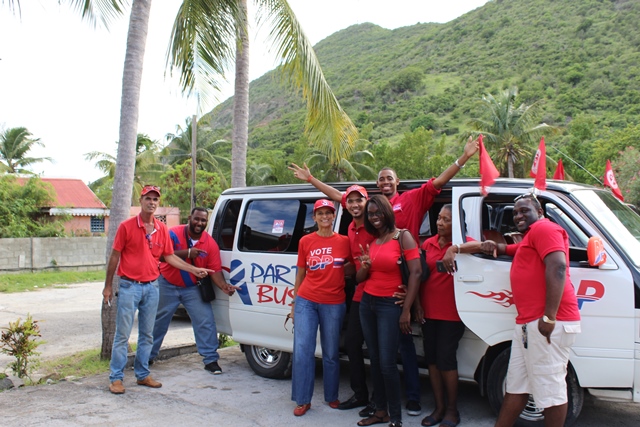 PHILIPSBURG – The Democratic Party (DP) plans to officially launch its innovative outreach initiative where teams of four DP candidates will drive around various districts on a special DP public bus as well as catching other regular buses this Friday, September 8.

On the route, candidates will listen to citizens’ concerns, dreams and wishes for the future. They will use the feedback from the discussions to strengthen the content and execution of the “Governing Vision.”

Leader of DP, MP Sarah Wescot-Williams is committed to going back to our roots where more contact style interactions can occur between the candidates and the public through this innovative bus tour concept.

“Back in the old days, we mostly engaged in small scale meetings. Listening to the people on the bus will provide our candidates with the opportunity to interact with persons who may not have the time to meet them during our regular contact and district meetings. Many of our hard working citizens utilize our public transportation system, and we see it as a good place to further strengthen our picture of the concerns of the population at large. This why the DP has been around for so long because we are grounded and listen to the people,” Wescot-Williams said.

If the passenger agrees, their ideas will be live streamed. “Our young, dynamic candidate Yoan Adams-Torres #16, who owns his own bus and by occupation is a bus driver has decorated his bus and will be the driver,” she explained.

Persons interested in joining the DP candidates on the DP Party Bus will be actively contributing to expanding “our DP Governing Vision Document in order to magnify the DP’s quality of governance.”

“What is often overlooked, is that citizens sometimes have very creative ideas about solving problems. We will attempt to collect those and enrich our governing vision. It is often the small challenges the average citizen encounters on a daily basis, which can sometimes be solved easily that will have the most impact on the lives of our citizens. We shouldn’t overlook those whilst concentrating on the bigger challenges our country faces,” Wescot-Williams concluded.