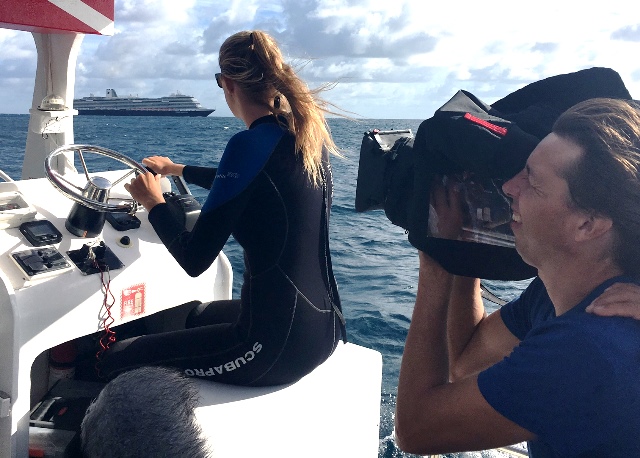 “Through my work, I have been fortunate to interact with a lot of animals in the wild, but this has to be the most impressive one,” said presenter of the show Menno Bentveld. “Encountering them in their underwater home was awe inspiring. They are truly the masters of the deep. They are gracious, gentle creatures, I felt comfortable diving with them,” Bentveld continued.

The episode showcases work by the Dutch Caribbean Nature Alliance in their Save our Sharks project, which aims to protect and manage sharks around the Dutch Caribbean islands. The three-year project is funded by the Dutch Postcode Lotery. The project aims to stop the decline of sharks in Caribbean waters through scientific research on the distribution of sharks, communication with policymakers, working with local fishing communities and by education of the wider public, both in the Netherlands and on the islands.

On St. Maarten, the crew filmed for 3 days with the Nature Foundation following all the work they do for shark conservation and research below and above the surface of the ocean. “St. Maarten is unique in this area as we have a great variety of shark species,” said manager of the Nature Foundation Tadzio Bervoets. “We find nurse sharks and Caribbean reef sharks on the reefs and there are tiger sharks and hammerheads in the open ocean. We have different monitoring programs for all of them.”

Two days were spent chasing the elusive sharks in an attempt to tag them for scientific research. After two days and 48 tries, the crew finally caught up with a 2.85m female tiger shark. She was given a full scientific workup and safely released back into the wild and given the name Liselot, after Bentveld’s daughter.

“The conditions on the water were challenging the first day,” said cameraman Jeroen Wisse. “Handling a camera on a small boat in choppy waters was something I have rarely done before. I did my best to make sure the audience won’t get seasick. But I’m sure we got some unforgettable shots,” He concluded.

Presenter Menno Bentveld holds on to the tail of a tiger shark being tagged for scientific research. (Credit: Jan Veenhoven)