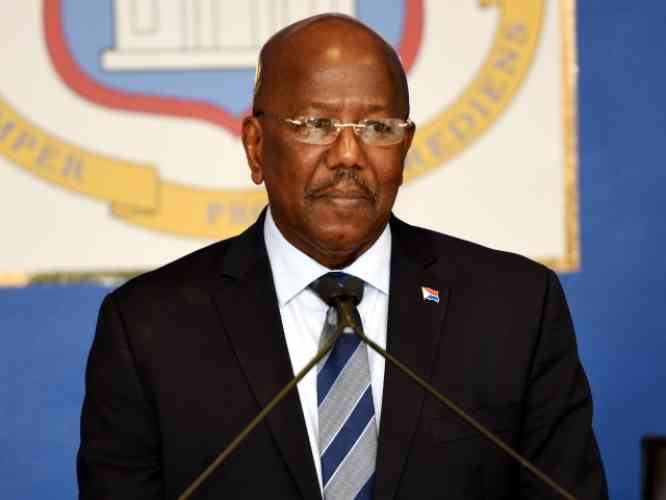 Fellow St. Maarteners and residents of our beautiful Island,

For many of us, 2017 could not end fast enough. It has been a year of unprecedented disaster in the form of Hurricanes Irma and Maria; a year in which many of our plans and even successes were blown away in six hours of pounding by a monster storm the likes of which have never been recorded in the history of the Atlantic Hurricane Season. But we are alive, by the sheer grace of God, and we hold on tenaciously to that saying that as long as there is life, there is hope.

Hope indeed is what we cling on to in these last days of 2017, as we welcome the New Year with renewed faith, and prayers that God would shower us with His mercies and spare us the nightmare of another hurricane strike in 2018.

For me, personally, it is with heavy heart that I remember all those who we lost not only as a result of the hurricanes, but also the many others who have transitioned to meet their Maker in the course of the year. May their souls find eternal peace in the Lord.

None of us who began 2017 with such great expectations could have foreseen the events of last September. From a governing point of view, we were on course for one of our best years in terms of our financial performance, having presented in record time, a balanced budget to Parliament for the third successive year, and with so many other projects nearing their execution phase that were aimed at improving the quality of life and standard of living of the ordinary man and woman.

Hurricane Irma brought about drastic and dramatic changes to every sphere of our lives, individually and collectively. However, it also revealed the resilient, never-say-die spirit of the St. Maarten people, who though knocked down by Mother Nature, refused to be counted out, and have been doing everything possible to bounce back at a rate that can only be described as amazing compared to the other islands which were ravaged by less powerful hurricanes.

As your Prime Minister and Minister of General Affairs in the last couple of years, I have worked relentlessly to uphold the Constitution of St. Maarten, before, during and in the aftermath of the September storms. I have done this, not just because of the oath that I took, but above all, because I strongly believe it was in the best interest of the people of this young country. In life, they say, one has to choose his or her battles, but there is one battle that I could not shy away from and that battle was standing up in defense of St. Maarten’s hard-fought autonomy.

In the process, did I make some mistakes? Naturally. Nobody is perfect. To err is human. But no mistake can be greater than capitulating to what is tantamount to blackmail in the midst of a crisis caused by a natural calamity like Irma. It is my hope that when the real story of these last days and months is written, the naked truth will eventually emerge.

For now, what is clear is that I have kept my word and will be stepping down, after 20 years, as leader of the National Alliance at our party Congress on January 3rd, 2018. I have absolute confidence in the person of Silveria Jacobs, who will be succeeding me. Her inspired leadership, proven particularly in these trying times, with the reopening of schools on St. Maarten in less than a month after Hurricane Irma, will surely usher in a new era for the National Alliance. It will be an era of new political achievements, of great advancement for the people of St. Maarten and a continuation of the high ideals and values which the party has upheld since its inception.

But this is no swan song. My stepping down as leader of the National Alliance does not mean I am retiring from politics. Far from it. I ask myself every day, “is St. Maarten worth fighting for?” And the answer each time is clearly, “Yes!” “Yes!” And “Yes!” again. I know I still have the fight in me to carry on the struggle for a St. Maarten where opportunities will abound for every child, for every man and woman, to realize their full potential in peace and harmony.

In the last 30 years of my political career, I have had the distinct privilege and honor to be elected continuously by the people of St. Maarten to represent and work for them in various capacities. I will be calling on you, the people, to once more give me your confidence as we go to the polls on February 26th, 2018. I will place my record and my fate in your hands again, as I have done in the last two generations, and let you, the people and nobody else, be the judge.

The overriding question that you will have to answer on February 26th is simple: who has stood up, against ALL odds, for St. Maarten and what is right and just and who has allowed their hunger for power get the better of them and turn them into collaborators to undermine the autonomy of our young country and open up the doors for a take-over that the people never voted for? That is the choice you will be called to make in the coming election.

In particular, I want you to take a closer look at the last two years during which I have had the honor to serve as your Prime Minister. I am sure you will acknowledge the amount of good work that has been done in that short period, together with the rest of the coalition, until the greed of some local politicians made them surrender the keys to St. Maarten’s autonomy.

I want to end this address on a note of gratitude. Gratitude to all of you who have supported the National Alliance throughout the years. Our party is a party of a large tent where there is room for everybody regardless of their race, color, creed, country of origin, age or even political views. Ours is a party of integrity, of hard-working, God-fearing, humble men and women who have an abiding love for St. Maarten. Together, we want to make St. Maarten a better place for our children and grandchildren.

I want to thank the entire civil service corps for the thankless job they continue to do, no matter which party or coalition is in government. There was nothing we could have achieved without their professional contribution.

Thanks also to all the members of the uniformed services, particularly the Police Force, the VKS, Customs and Immigration officers, the Fire Department and the employees of the government-owned companies, especially GEBE, the Princess Juliana International Airport, the Harbour, Telem and everyone else whose efforts and sacrifices has brought St. Maarten back to where it is today, in less than four months post-Irma.

Special thanks to all the members of my cabinet and others who have worked closely with me in the past years.

And of course, without any doubt or hesitation, I want to thank all those entities, governments and organizations who came to our rescue in our hour of need: the Dutch government, the Curacao and Aruban governments, the U.S. government, and people from all across the globe who were moved by the images of the destruction Irma left behind and rallied quickly to send much needed emergency aid to us: we are eternally grateful.

Last, but not least, I want to thank my family – my wife, Gabrielle, and children – for their love, support, understanding and sacrifice. Thank you for always having my back.

The year ahead of us is going to be full of challenges as we dig ourselves out of the rubble Irma created – financially, economically, politically, psychologically, and emotionally. But we know, through experience, that when the going gets tough, the tough get going. I pray that God will grant us the strength and wisdom to keep going in the right direction.

Finally, on behalf of my family and myself, I wish you and your loved ones health, peace, love and happiness in the New Year.