GREAT BAY – Judge Sander van Rijen gave the Cadastre and its former director Clemens Roos until next week Friday to settle their dispute over unpaid salaries. If parties do not reach an agreement, the court will issue its ruling on November 13.

The Cadastre fired Roos per July 31 – four months shy of the end of his contract – after he was arrested and extradited to the Netherlands on June 24. Roos worked at the Cadastre since 2008. After the Dutch authorities let him go, Roos returned to the island with the intention to finish his contract, but instead of taking him back, the Cadastre’s supervisory board terminated his contract.

“My client won a lawsuit in the Netherlands where he had been labeled as a fugitive,” attorney Jason Rogers told the court. “He came back to the island to finish his contract.”

According to the attorney the acting chairman of the supervisory board, Vincent Boetius, had invited his client to a meeting on August 19. “Stop by before you go to the office, he told my client. He thought it was to discuss work agreements, but in that meeting they only talked about his dismissal. His request to adjourn the meeting so that he could consult with his lawyer was ignored.”

Rogers said that attempts had been made to settle the matter – basically about the payment of the salary on the last four months on the contract and about additional financial compensation – but that parties had not reached an agreement.

“This case has generated a lot of publicity and politicians also got involved,” Rogers said. “The Cadastre has a prominent position in St. Maarten.”

The attorney doubts that the dismissal will hold up in a regular court procedure. “The meeting of August 19 was about ratifying the decision to dismiss my client that the board took on July 30. There was never space for my client to explain his position. There are no reasonable grounds for his dismissal.”

Rogers noted that, based on a ruling of the Supreme Court “detention does not justify dismissal,” adding that all circumstances of the case have to be considered. “The Cadastre has not done this.”

Roos was not only fired as the director of the Cadastre, but also as its mortgage custodian. “The latter appointment was done by the Executive Council and that body should also terminate that contract,” Rogers said. 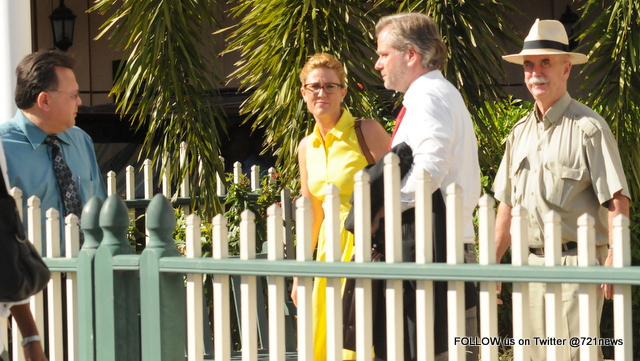 Here we can see the Cadastre’s attorney Camiel Koster and the attorney the acting chairman of the supervisory board, Vincent Boetius leaving the courthouse.

He furthermore pointed out that a condition for terminating the contract is a serious shortcoming in which the Cadastre is involved. Roos’ conviction in the Netherlands has nothing to do with the Cadastre.

The Cadastre demanded in reconvention that Roos return items that belong to the organization. On the spot, Roos handed over a laptop, a cell phone and a credit card.

The Cadastre’s attorney Camiel Koster told the court that the supervisory board had followed all the rules. “They have handled this case carefully and the decision they took is valid. Roos has omitted to reveal essential information when he was hired and during his tenure. He should have reported his conviction. In that case, the Cadastre would not have hired him.”

Koster noted that the nature of the function and the reputation of the Cadastre carry more weight than Roos’ right to privacy. He furthermore told the court that Roos lives unlawfully in an apartment that is paid for by the Cadastre. “He should have vacated the place in august and that has not happened.”

If Roos wants to be admitted to the Cadastre as its mortgage custodian, he should address this with the relevant minister, Koster said.

The attorney said that the Cadastre was in itself satisfied with the way Roos did his job. “That is not the topic of discussion here. Remaining silent about his past is however unforgiveable. He had a sensitive function in a country that is rife with accusations of corruption.”

Rogers told the court that Roos could have worked from his home and behind the scene. “The Cadastre did not want to hear about this. They simply wanted him gone.”