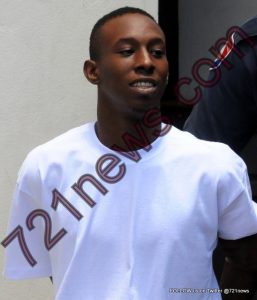 GREAT BAY – The trial against Ridge D. (aka Kilo Gotti), the 23-year old who is accused of killing police officer Gamali Benjamin on August 5 of last year, will now take place on Wednesday April 13.

The court has cleared the schedule for that day to deal with D., aka rapper Kilo Gotti, his co-defendant Jovanny L. and for two other suspects who are charged with driving the getaway car that facilitated the initial escape of Jovanny L. and with filming the location of the armed robbery at Oro Diamanté, the jewelry store on Front Street that was the victim of an armed robbery that day.

The court will handle the case of the two main suspects in the morning and those of the others in the afternoon for security reasons.

Mike A. allegedly drove the getaway car that let Jovanny L. escape from the police on August 5. Upon his arrest, police found live ammunition in his possession.

Attorney Geert Hatzmann said that his client is scared to death and that it is therefore necessary to handle his case apart from those of the main suspect.

In this case there is no flight risk and no risk of collusion because the investigation is complete. My client has no criminal record. It can be well explained why my client can return to society.”

The attorney asked the court to terminate or suspend his client’s pretrial detention, but prosecutor Nanouk Lemmers objected and Judge Winfield agreed that there are sufficient serious objections against A.’s release.

The same fate awaited Obed C. who allegedly helped prepare the robbery at Oro diamante by filming in the store until the owners told him to get out.

His attorney Safira Ibrahim said that there are no documents in the dossier that link her client to Jovanny L. who reportedly pushed him to make the video footage. “My client denies his involvement and it does not appear that he knows Jovanny L.”

But the court also rejected Ibrahim’s request to terminate or suspend her client’s pretrial detention.