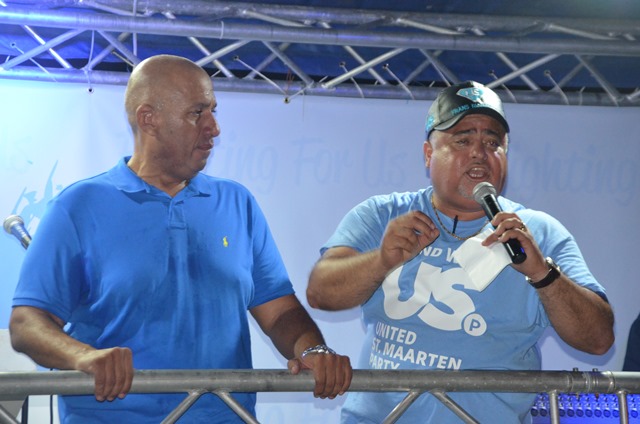 PHILIPSBURG, Sint Maarten — Leader of the United St. Maarten (US) party Member of Parliament Frans Richardson on Tuesday said Gibson’s so called “watch” should be over since his party didn’t agree with him on the issue of tax reform. Richardson, whose party was the first to propose tax reform that would lead to indirect taxation, noted that the National Alliance included indirect taxation in its manifesto released on Monday.

Gibson in late August went on record in the media to state that indirect taxation would not be implemented “under my watch”, prompting Richardson to dub Gibson as completely out of touch with the realities of St. Maarten. On Monday, Richardson pointed out that on page 13 and 14 of the Alliance Manifesto, the white party agrees with what the USp has been saying for most of this year: “The reigning tax system has to be reformed in a manner that is fair to all.”

Under the “Review Fiscal Policy” section, the NA manifesto also concurs with what Richardson had reminded Gibson of when he made his “not under my watch statement; the tax framework has been approved by the Council of Ministers which included broadening the base by simplifying the regime, abolish undesirable regulations and a shift from direct to indirect taxes. The NA manifesto states: “Execute the framework approved by Council of Ministers on tax reform e.g. lower Income Tax, lower Profit Tax, shift to more indirect taxes and broadening the tax base.”

“So now that his party agrees with the indirect taxation model, is the Minister’s watch over?” Richardson asked. He re-iterated that it is clear that the Minister is part of an old way of thinking and not willing to listen and look at evolving like the rest of the world. “The easiest thing to do is to put direct taxation on the small man, burdening them while some of them pay an average of 35 percent wage tax on top of a debilitating ToT that are passed on to them,” Richardson said.

“For years our tax system has depleted the middle class. And, the Minister in stating that only the rich will benefit, acts as if the current system is so greatly beneficial to the poor. With a carefully studied and applied indirect tax model, rich and poor pay the same and, please note, that the so call “rich” consume more so they spend and contribute more,” Richardson said.