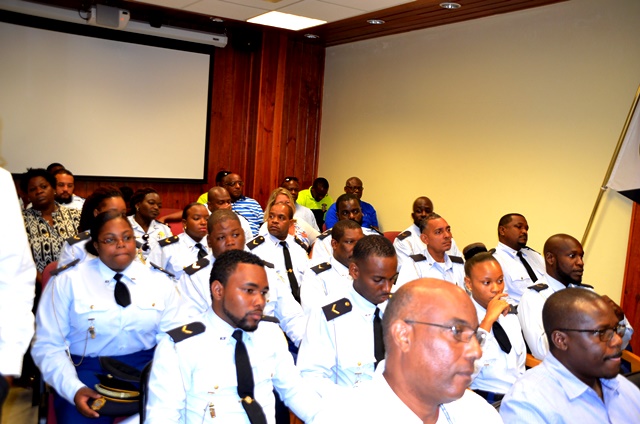 PHILIPSBURG, Sint Maarten — Leader of the United St. Maarten Party (USP) MP Frans Richardson on Friday congratulated the 15 police officers who finally received their decrees (landsbesluiten) from Minister of Justice Edson Kirindongo who was appointed by the USP in the current governing coalition. The ceremony was held at the Police Station in Philipsburg.

MP Richardson recalled that when meeting with the Minister before his tenure started, the party’s message was straight to the point: take care of the civil servants that fall under the justice Ministry. “Today I can say that the Minister is fulfilling his duty and has made the people of St. Maarten proud for the direct actions he is taking for civil servants,” Richardson said.

He said the USP received the opportunity to take on responsibility for one of the more challenging Ministry’s. The Justice Ministry, Richardson continued, is typically the Ministry others run from. “But we took on the challenge because the men and women in blue and everyone who fall under this Ministry serves and protects this community and they deserve to be taken care of.

Richardson said he was happy to be at the ceremony because the officers often reminded him of the promises made by the USP for the justice Ministry. “We are proud to deliver for you. As you continue to do your jobs to the level that you must, the people of St. Maarten will always have your backs and so will I,” he said.

MP Richardson also used the opportunity bestow praise on Police Chief Commissioner Carl John. “Nothing makes me feel more proud than to see one of our own in command. This is a proud moment for all of us. I ask all of you here today to aspire to be the next Carl John because we need you. We will continue to fight for the men and women in blue because you fight for us. I will continue to be your voice,” Richardson said.