Home 721news Gibson: No reason to panic about decline in revenue 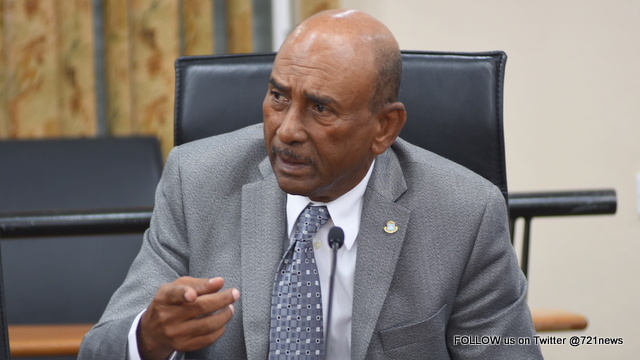 PHILIPSBURG – Minister of Finance Richard Gibson suggested that the financial situation of St. Maarten, in terms of government revenue, is not as bad as reflected in the first execution report of the first quarter of 2016.

The Committee for Financial Supervision for Curaçao and St. Maarten (CFT) had stated, in a letter dated June 8, to the Minister of Finance that the budget balance of the first quarter of 2016 had deteriorated by some NAf. 8.6 million. The CFT said that the first execution report of the first quarter of 2016, submitted by the St. Maarten Government “painted a picture that deviated from the approved budget.”

However, Minister Gibson explained that though revenues for the first three months had fallen short of what was projected in the budget, revenues in the succeeding months have increased. “What has not been shown as yet, because that comes actually in the second quarter (report) is that the 4th and the 5th month of this year have shown a substantial increase over income for the previous year, so apparently the shortfall in the first three months of this year had some kind of a delay reason that we have not put our finger on yet, but it has caught up somewhat,” the Minister explained.

Additionally, Minister Gibson noted that expenditure for the same period was NAf. 7 million less than what was projected. “At this point in time, although we have some serious decline in economic activities, from a budget point of view, there is no reason to panic and I have good reason to believe that at the end of the road, we will be meeting the revenues projected in the budget so that there is no deficit being generated as a result of not being able to collect sufficient revenues,” he stated.

However, the Minister is puzzled by increased revenue for wage taxes, but with a corresponding decline in turnover taxes. “Those two things really don’t go hand in hand…If you have less income you’re not going to hire more people, but if you have more wage taxes being collected it means that more people are being hired,” he reasoned. “We need to have a longer period to be able to analyze all of these numbers before we can give you definitive assessment as to what’s going on in the economy.”

The CFT reported in the letter to the Minister that the budget balance mainly deteriorated due to disappointing revenues of more than NAf. 15.3 million, which were a bit compensated by lower expenditures of about 6.7 million. Of the budgeted revenues of 144.4 million, only 129.1 million has been realized, which is a difference of more than 15.3 million guilders, the CFT calculated. The decrease in revenues was mainly due to lower tax revenues (7.4 million), the fees and concessions (2.6 million), permits (1.2 million) and other revenues (4.1 million). 7

Source: 721 News Gibson: No reason to panic about decline in revenue