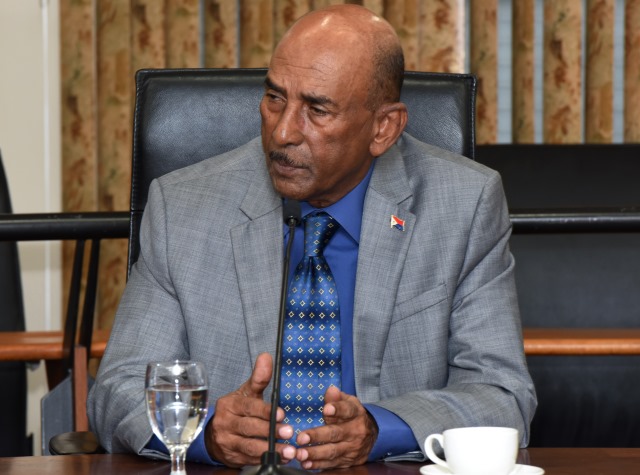 PHILIPSBURG, Sint Maarten — The Government of St. Maarten will be looking at ways to increase government revenue so as to meet targets ahead of the 2017 island budget. Minister of Finance Richard Gibson in Wednesday’s Council of Ministers press briefing identified two steps by the government to supplement the budget. One is casino fees indexation and the other retrieving overdue taxes estimated at NAf. 7 million from the St. Maarten Medical Center. “There are certain steps that have been taken to increase 2017 (revenue), as you know one of them is the indexation of casino fees. That’s in the pipeline. That is going to generate additional income. There are also certain possibilities…SMMC owes substantial amount in taxes that there are unable to pay,” he said.

Regarding retrieving taxes owed to government by the SMMC, Minister Gibson identified the expansion of the hospital and the sale of property it owns as means by which the government can retrieve the Naf7 million owed to it. I’m hopeful we are going to collect those taxes with the establishment of the new hospital that is going to include the sale of the lands and buildings from SMMC in the financing structure that is being used that result in substantial; payment being made to SMMC and from those payments that taxes owed to SMMC can be collected,” Minister Gibson said.

The minister said he is hopeful that things turn around for the economy as the government looks to meet its revenue targets for the remainder of 2016 and 2017. He is hoping to present a balanced 2017 budget but acknowledged that the challenges currently facing the government is making that difficult. “Everybody is scrambling at the moment with various elements that have to appear in the budget and that meets the requirements of the law. It has been a struggle economically, not only here but worldwide. Things have not been how we expected them to be,” Gibson said. The minister however promised that he intends not to cut any government subsidies to social organizations in the 2017 that the government was forced to cut in the budget for 2016.