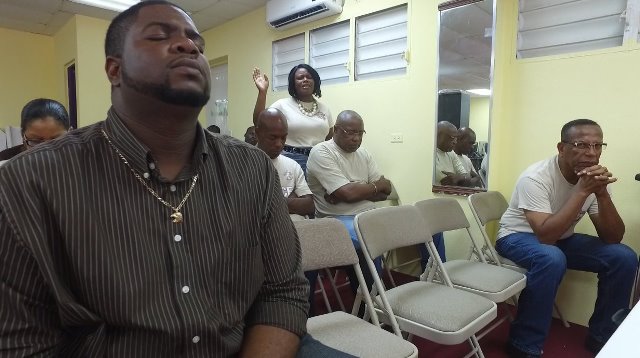 PHILIPSBURG – Hundreds of people participate in a national prayer vigil that has been organized by the St. Maarten Christian Party (SMCP).

The prayer vigil took place on Thursday, September 22, between 12:00pm to 2:00pm and called for all civic-minded individuals to join with the party in praying for a safe parliamentary election and for the success of St. Maarten as a nation.

Party president Jacqueline Godet explained that prayer is a universal language. “This is not about party politics. Despite your political affiliation, our Constitution states that St. Maarten is a nation under God. Therefore we all united at this time for the common good. Wherever the people was on Thursday, September 22, they joined us in prayer. God is everywhere and you can reach him at home, at school or on the job. Everyone would have a chance to exercise their democratic right to vote, but at this time let’s come together with one mandate; seeking divine intervention for the good of this nation,” she stated.

The prayer vigil is not new to the SMCP, since the party has participated in several activities of this nature from its establishment. However, party leader Wycliffe Smith noted that this kind of movement is critical at this time to prevent ill will and evil forces from perpetuating confusion during this election season.

In a press release issued late Wednesday night  Smith said “I am appealing to the community to become involved in this activity on Thursday. If you are a praying person then activate the spirit of intercession and join us. Our headquarters at 166 Back Street is available for you to visit as well. We picked this time of 12:00pm to 2:00pm so that many people could attend the vigil without interfering with work or church schedules. We have not made it mandatory for anyone to attend. In fact, we are suggesting people come out if they can,”.

Following the prayer vigil on Thursday, the SMCP continue its campaign with a public meeting on Thursday night at 7:30pm  in Cole Bay (across from Harley Davidson) and today Friday night, September 23, at 7:30pm at the ITC Parking Lot in Madame Estate.