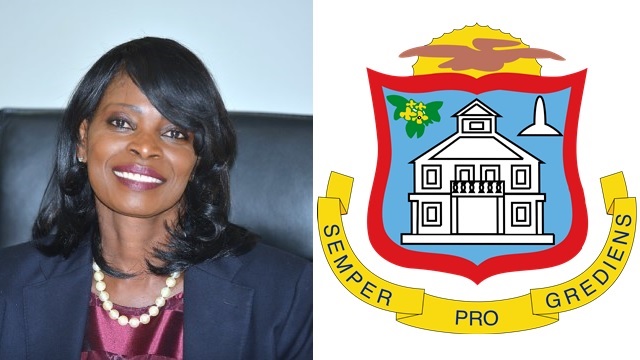 PHILIPSBURG – St. Maarten bus drivers must possess an ID issued by French authorities in order to operate their busses from Philipsburg to Marigot.

These drivers must also have the Dutch nationality. Minister of Tourism, Economic Affairs, Transport and Telecommunications (TEATT) Ingrid Arrindell made this disclosure at the Council of Ministers Press Briefing on Wednesday, June 22.

She told journalists that authorities on both sides of the island met recently to hammer out issues pertaining to public transportation and drivers from either side of the island operating across borders. Thirty bus drivers from both French and Dutch St. Maarten will be allowed to serve the trans-border route. Fifteen of these drivers so far have the ID, and a sticker placed on their busses to indicate the permission to drive their busses on the French side.

The discussions revealed some unfair practices, which had to be addressed, the Minister noted. “The main agenda points were regulating the trans-border routes, identification of the legal bus drivers consequently, the ID cards will be a prerequisite for Dutch side drivers that are allowed to service the Philipsburg/Marigot route and the controls that are to be done when these busses enter the terminal on the French side,” Minister Arrindell said.

In explaining the reasons for the decision, the Minister disclosed that some drivers on Dutch St. Maarten were not following rules on the French side. “The reason for the need to execute and implement the trans-border Marigot/Philipsburg route resulted from the imbalance that was created from the large influx of busses from the Dutch side on the Marigot-Philipsburg route and the fact that a lot of these drivers are not allowed to work on the French side,” Minister Arrindell stated. She added that some of these bus drivers do not use the bus terminal and create their own route on the French side.

The Minister commented that it is the hope that these new actions by authorities on both sides of the island, will help address some of these long standing issues with public transportation. The Minister also noted that once the agreement is finalized between her and her counterpart on French St. Martin, controls will be conducted by the French Gendarmes.