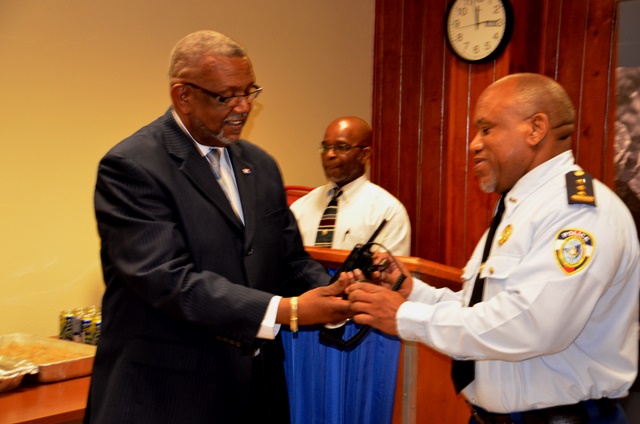 Minister Kirindongo led the way with an emotional speech that focused on the pride he felt on Friday being among the officers and knowing that he has accomplished what he promised he would and is fulfilling the mandate given to him by the United St. Maarten Party (USP).

He went on to announce that the Police force has acquired five tint meters from the company First Response, purchased three K9 vehicles, has finally secured new radios for the officers and he added extra emphasis on the fact that the insurance for police officers has been approved.  The Minister also said the “functie boek” for the police should move to the next phase soon and be ready within short.

Additionally, the Minister noted that since he started his tenure, he has signed more than 100 decrees for civil servants under his Ministry, including 24 which were also presented to the Coast Guard on Friday.

“There are moments in life when there are not enough words to express how you feel at a moment,” The Minister said. “This is one of those moments. I would like to thank the party for placing trust in me to appoint me as Minister. I would like to thank the union that put their trust in me to get things done, my staff and the Council of Ministers. I am proud to be able to do for St. Maarten,” he said. He also told the officers: “You are called to a purpose. St. Maarten really needs you.”

The Minister also said he is very proud to be the first Minister of Justice to give a local law enforcement officer his official designations as Chief of Police. He pinned Chief John with his insignias last week. For his part, Chief John said that he worked with many Justice Ministers who have all tried their best to do right by the Police force of St. Maarten. “But, I like your style better,” Chief John said describing Kiringdongo. “You think like a real Police officer. You do not complicate matters but you look for solutions.”

In addressing his officers, John said that being as young as they are, and having been put in the field to assist their fellow officers even when their training was not complete, they should feel very proud about how far they have come. He said the evaluation the officers received from an independent entity out of Holland was extraordinary. “Be proud. Don’t let anyone take what you have done (in terms of hard work) away from you,” John said. “Many (police forces) may beat us in equipment and resources, but they cannot beat our big hearts,” he said.

Chief John also disclosed come statistics as examples of an improved and efficient Police force. He mentioned that Naf 190,000 has been collected in fines in 2016 thus far. Whereas the police averaged 3,000 fines written per year for the last five years, they have already written out 2,900 for the first 6 months of 2016. Lastly, John pointed out, the Police force is handling complaints within 6 hours on average, a vast improvement from before.