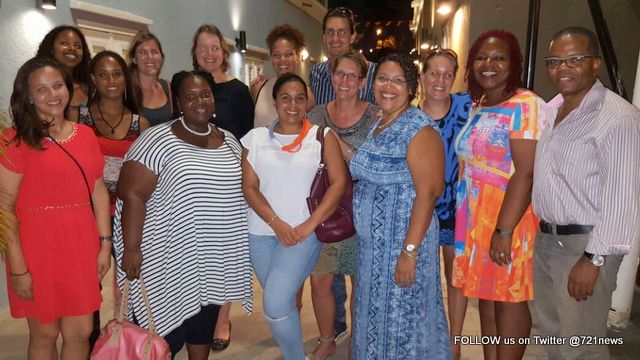 PHILIPSBURG – March 11 and 12, 2016 marked the dates for SXM DOET 2016. SXM DOET is part of the largest volunteer initiative ever launched in the Dutch Kingdom. The goal of the initiative is to ensure that locally existing organizations successfully execute a project, one they have not yet been able to, which benefits themselves, and in turn, the community.

For SXM DOET 2016, over 1,000 dedicated volunteers successfully completed 43 projects registered by 30 various organizations from all around the Dutch side of the island. The participating organizations were diverse and their projects varied to an even greater extent; emphasizing the various ways a person can give back to society. This led to having projects geared to everyone’s liking and capabilities, thereby attracting persons from all walks of life, all ages, nationalities, skills and interests.

On April 25 and 26, 2016, two coordinators of the SXM DOET team Melanie Choisy and Laura Bijnsdorp, attended the Kingdom DOET meeting during which representatives of CURA DOET (Curaçao), BON DOET (Bonaire), STATIA DOET (St. Eustatius) and ARUBA DOET (Aruba) were present. Jonne Boesje, communications and funding manager of Oranje Fonds, the initiator and key funder of the DOET-initiative, led the meeting.

Island representatives held presentations about the execution of the DOET event on their island, then the group discussed various techniques on recruiting organizations to participate, marketing strategies to engage more volunteers, tips on assisting participating organizations in arranging their projects smoothly, on how to improve the current website in order to make it more user-friendly and the specific goals for DOET 2017.

The representatives found many ways on how to enhance and improve their DOET event, which is important as the overall conclusion from the Oranje Fonds was: DOET is here to stay on the islands.

The SXM DOET coordinators would once again like to thank: RMG Designs, Heavenly Water, Kooyman, Divico, Cake House, Firgos, Greenfingers, Easy Print, Divi Little Bay Beach Resort, Buccaneer Beach Bar, Metiss Pastry, Viva Signs, Island 92, the Philipsburg Broadcasting Company (specifically Laser 101), Caribbean Legacy, as well as those companies who supported organizations on their own accord, the Oranje Fonds to whom the initiation of SXM DOET and its funding deserves all credit.

“Last, but not least, they would like to give huge thank you for all the hard work of the participating organizations, and volunteers who completed the 43 projects for SXM DOET 2016. SXM DOET looks forward to seeing everyone who participated again next year for an even bigger SXM DOET 2017 event. With initiatives like SXM DOET we can bring the positive change we wish to see in our community!” stated a release from SXM DOET.