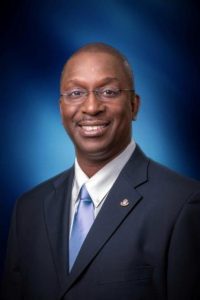 PHILIPSBURG – Independent Member of Parliament (MP) Maurice Lake said Minister in charge of GEBE Angel Meyers should call a general assembly of all GEBE workers at Belair Community Center to update them about developments at the company, as soon as possible.

Lake stated that the workers and the public had a right to up to date information about their company. GEBE needs to restructure their public relations and communication team to ensure everyone is informed properly and in real time, he continued.

“Communication within an organization is key. If management of the employees are not informed about matters that involved them, then things start to live a life of their own. I am looking forward to the GEBE Shareholder Representative Minister Angel Meyers calling for a general assembly meeting with GEBE Management and staff‎ to update them on matters related to the company. This meeting should take place this week, the sooner the better,” Lake stated.

“This general assembly is very important in order to lay rumours to rest and provide facts and information. It is good to bring clarity to GEBE and the people of St. Maarten. GEBE has the best local professionals and engineers on the island‎. It’s high time now we get our act together and start putting the right persons in the right positions to lead GEBE. There were too many changes in the top management positions and favouritism over the years, which just demotivated the employees. It’s time to do it right and start holding management responsible and accountable for the company’s performance,” Lake continued.

“It is not just about the leaking of information, but the constant chaos and fighting and standoff with the previous and current Shareholder Government. The board needs to stop micro-managing the company and start holding top managers and department heads accountable for not executing projects in the general interest of the people. GEBE should never have 30 million in already approved projects on the budget that are carried over year after year, but never executed. GEBE should have a five-year written investment plan and a better training and development plan for their employees.”

“We need to bring back stability into the company by putting the right people in the right positions to take St. Maarten to the next level. I think with a new appointed team of local professionals and managers, they can take the company to the next level to better serve St. Maarten. GEBE is the engine of our economy. Without electricity and water, everything would come to a complete halt,” Lake stated.

Meanwhile, Government is following the right procedures and the right process to screen the proposed names through the Corporate Governance Council, and the National Security Service of St. Maarten. This process could take four to six weeks. In the meantime, the current Board, based on the articles of incorporation, has appointed an interim Managing Director from within its ranks, Mr. Zagers.

Zagers can make day to day decisions within the company and execute existing projects on behalf of the company. The board has already approved projects dating back a few years.

“The stories out there that GEBE doesn’t have a Manager, who can make decisions is not true. Maybe we have managers in GEBE, who are hesitant to execute already approved projects in the general interest of the country, which is not doing their job,” he said.

“Waste-to-energy project, solar, alternative energy are not politician pet projects, it’s a project for St. Maarten, which GEBE approved in our National Energy Policy. We have Board Members and Managers who feel the company belongs to them and we have to get away from that myth. We have to be clear about the people’s business. Work continues as usual, and the current Managers have to start executing the projects that are already approved on the budget. It’s plain and simple,” Lake stated.

“The general assembly meeting is very important. GEBE Management and staff, can receive information on where we are now, where we are going, and how we going to get there. This is the best approach, instead of employees hearing it through the grapevine and everyone twisting the story left, right and center.”

“As a former Minister, who completed the energy policy for St. Maarten, GEBE board and management played a very important role of finalizing the policy where waste-to-energy (reducing the landfill dump), alternative energy, solar, and clean energy, were high on their priority list for 2016. What happened and how far we are with these projects needs to be brought forward in line with transparency,” Lake continued.

“It’s a national shame we have not started these projects as yet in the general interest of the people. We are all complaining about the dump that makes people sick, but still not doing anything about it. It’s time to take action. I was a former Minister that appointed the current Board, and I believe a Board is appointed to supervise and to make sure Management executes projects in the general interest of the people. There also needs to be a performance agreement as well for boards of government-owned companies coming from the shareholder, which allows for a better effective, efficient and productive supervision and management of the company in the interest of the employees and the people of St. Maarten,” MP Lake concluded.