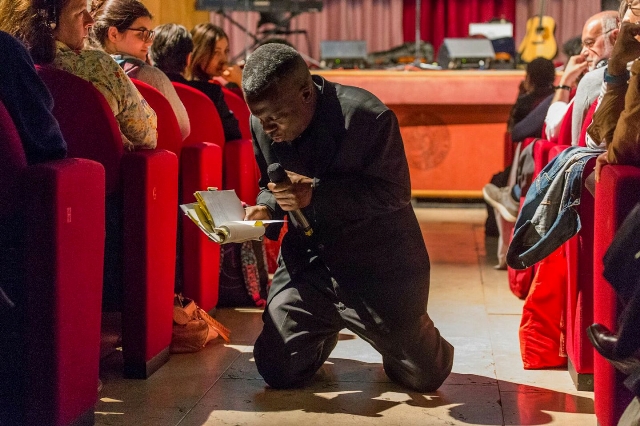 The St. Maarten writer was a guest of the 10th annual International Literature Festival of Venice and the 12th edition of Poetry Vicenza. According to Calderaro, “thunder” referred to Sekou’s powerful reading in Venice on the morning of March 31.

The Santa Margherita Auditorium was filled with some 250 people for the recital that started at 11:00am. For nearly two hours the audience was presented with literary readings by authors Jeffrey Wainwright (UK) and Lasana M. Sekou (St. Maarten); lyrical poetry by poet/violinist Michele Gazich (Italy); and bluesy stylings by poet/musician Eric Andersen (USA).

Poems by Wainwright and Sekou were also read in Italian in the theater. Sekou’s “Great Salt Pond Speaks” drew a prolonged applause following its performance. Calderaro had explained the poem in her Italian introduction of the Caribbean poet.

The long poem about the history, cultural symbolism, and garbage dump pollution of St. Maarten’s great pond is from The Salt Reaper. Sekou also read from his new collection Book of the dead, said Jacqueline Sample, president of HNP, the book’s publisher. After the reading Sekou autographed his poetry and fiction books at the outdoor plaza of the venue, according to bookstore owner Stefano Chinellato.

“Our main goal is to have a small number of writers dialogue with their readers in the beautiful environment of the city of Venice,” said Pia Masiero, director of the festival. With a history of guest writers such as Salman Rushdie, Orhan Pamuk, Cees Nooteboom, Derek Walcott, Rita Dove, and Amitav Ghosh, at least 25 authors from Japan, India, Israel, Kenya, Italy, Canada and other countries were guests in 2017 for the four-day literary event, also known as Incroci di civiltà (Crossings of Civilizations, incrocidicivilta.org).

Sekou and Wainwright’s second recital, for Poetry Vicenza 2017, took place at Chiericati Palace on April 1. According to the city’s Vice Mayor Jacopo Bulgarini d’Elci, the paintings by Tiepolo and other masters that surrounded the visiting poets and their audience in the stately civic arts gallery, date back to the 14th century.

“It was against this backdrop, with images of myths and legends, that we saw images of Lasana delivering narratives of St. Maarten and the Caribbean at Poetry Vicenza. The photos of him reading were posted on Facebook even before he returned home,” said Sample on Monday, goo.gl/VjW7Wp.

The English original and Italian translation of “No Love Poems” and “lil’ s’maatin” by Sekou were published in the book Poetry Vicenza 2017, edited by literary scholar and festival founder Marco Fazzini, theartsbox.com.

From mid-March to early June, “Poetry Vicenza, with Marco Fazzini at the helm like a renaissance man, is the literary component of the ‘event space’ of literature, contemporary music, and art that the city takes great pride in each year,” said Sekou.

“Add to the energy and international reaching of both festivals in the Venetian region is the tireless and meticulous Michela Calderaro. If Caribbean Literature has a muse in pioneering its presence to Italian academia it’s her,” said Sekou.