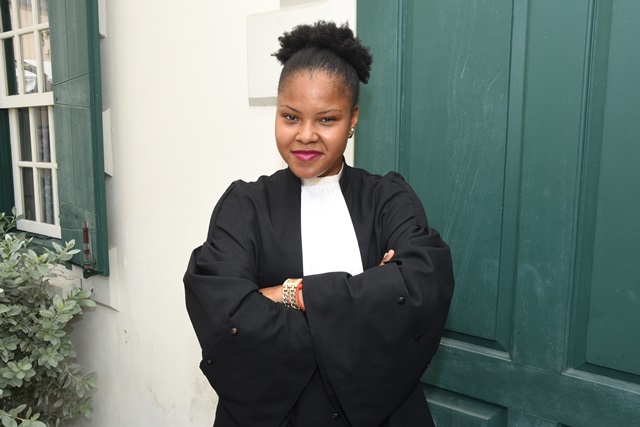 PHILIPSBURG – On Friday, July 22, Mackeson “Mac” Jean-Charles and his lawyer Sjamira Roseburg from Peterson and Sulvaran law office, filed an official complaint at the National Detective (Landsrecherche) against police officer L.W. (former fireman) for alleged ill-treatment of Jean-Charles, which resulted in a broken jaw.

Roseburg told 721news that on Monday, July 18, after her client approached her for representation, she e-mailed the Prosecutor and Attorney General’s office in Curaçao informing them of the ill-treatment by police of her client Jean-Charles. She requested the cooperation of the two offices for her client to file an official complaint against the officer, who had allegedly carried out the ill-treatment of her client.

“I am happy with the fast response I got from the Prosecutor and Attorney General’s office. They have agreed and have sent my client to file his complaint at the National Detective’s office,” Roseburg told 721news.

“Finally, today (Friday July 22) my client got his chance to say his side of the story. Now we need to wait and see what will be done with his complaint. After 8 days of the incident my client’s jawbone is still broken and now we going to put pressure on the medical insurance (SZV) so they can make his case a priority!” Roseburg stated.

“It is over a week now and he still did not get medical help. That’s a shame,” Roseburg continued.

According to reliable sources, this is not the first time Police Officer W. has been accused of use of excessive force. A few years ago, he was cleared by the Internal Affairs Department when another police officer in that department did not allow a victim to sign a complaint of police brutality against W. This meant no complaint was filed, therefore W. could not be prosecuted.

721news asked the law office Sulvaran and Peterson if they have other cases of police brutality pending. They told us that because of client confidentiality they cannot give details. However, they did confirm that they have five cases that were officially filed by the Prosecutor’s Office, and have been waiting for months for the investigations to start. Meanwhile, all police officers named in those cases are still working.

721news also understood from other sources that other victims of police brutality who filed complaints never received justice for their cases. One of the victims said this issue of police abusing citizens needs to be taken more seriously. The Minister of Justice Kiridongo has to ensure justice for the victims, otherwise this abuse will never stop.