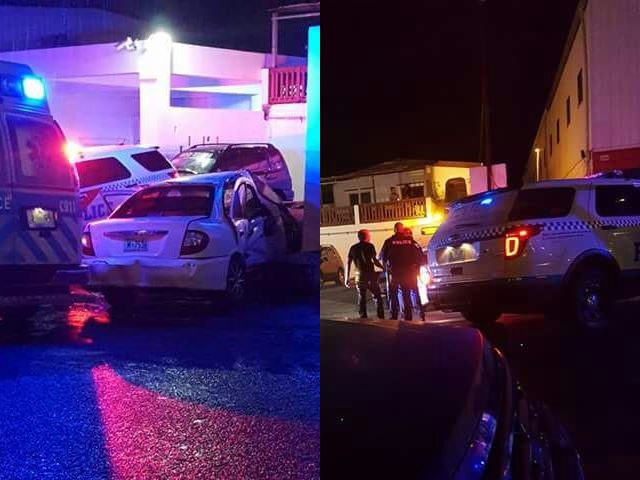 ~ He was released without charges the next day ~

ORANGE GROVE – On Saturday night, October 15, a police patrol in Cole Bay ordered a motorist in a white car to stop. The driver refused to heed the police order, and decided to drive away. At this point, the police patrol started to chase him.

On Orange Grove Road, the police boxed in the car from behind causing the vehicle to spin around and hit a wall. The driver was injured, and taken by ambulance to the St. Maarten Medical Center (SMMC) for further medical attention.

Lately, 721news has noticed an increase in police chases. The pertinent question here is, what did the “suspects” do to warrant police starting a chase? Last week, police chased a scooter rider from Philipsburg into Madame Estate, where the rider lost control of the scooter causing him to fall and injure himself in front of the KPMG office. No official police report was issued or sent to the press.

It is still unknown to 721news why the young man in the car was arrested, and/or what illegal thing was found on his person. The car was not stolen but was his sister car he was driving.

The question is: who will fix the man’s car, and were police authorized to use excessive force on a driver, who refused to stop for a routine traffic control?

Because 721news clearly understood that the driver was not an armed robbery suspect, or a fugitive of the law, what is the reason police had for controlling the driver in the first place? In addition, who will be the responsible for the medical bill? Who will pay for the damage done to the police car ?

721news hopes to receive more information from police on this incident.