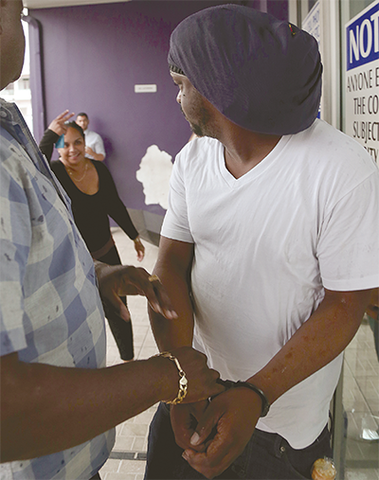 TRINIDAD — An Arouca bar owner, who is accused of assaulting a woman by kicking her in the head repeatedly and striking her with a metal object, was carted off to jail last night hours after appearing in court on three criminal charges.

Ricardo Jerome, 36, of First Avenue, Oropune Gardens, Piarco, who has also been employed as a labourer at the Customs and Excise Division for the last seven years, was unable to have his bail processed as he appeared in court shortly after 4 pm. With today being the public holiday of Divali it is unlikely his bail can be processed in prison, sources said.

On his way to court, Jerome was taunted and threatened by women, one even lunging and pulling at him as police officers escorted him into the courtroom. Jerome stood before magistrate Debbie-Ann Bassaw, charged with unlawfully beating the mother of his child, with his hands clasped in front of him and his head bowed. A half-eaten pack of biscuits protruded from his front left pocket.

Jerome surrendered to police last Friday after a video began circulating on Facebook, showing a vicious assault of a woman, identified in court yesterday as Ornella Marchan, at Nella’s Sports Bar, Arima Old Road. The alleged incident took place on November 5. He pleaded not guilty to the offence as well as being in possession of a weapon, which police said was used in the alleged attack, and disorderly conduct.

Jerome was brought to court just after 4 pm through the public entrance of the courtroom. Those who had gathered to see him left as the rains began to fall. Inside the courtroom his mother sat along with the media listening to the presentation of his case.

The magistrate was informed that Jerome had two previous charges of assault and charges of possession of ammunition and a firearm. That matter, he claimed, had been dealt with but without his criminal record or a court extract, his claim could not be verified.

Jerome was granted $60,000 bail to be approved by a Clerk of the Peace. He was told if his criminal record proved to be untrue his bail would be altered and increased. If it turned out to be accurate, then he may get a reduction in his bail.

Through his attorney, Fareed Ali, the prisoner agreed to return to court on Friday when his criminal record would be made available. As a condition of his bail, Jerome was ordered to stay away from Marchan, who the court learnt had been living at the home of Jerome’s mother.

Ali assured that his client had every intention of staying away from the 35-year-old woman and would comply with the court’s order.

Since his court appearance took place beyond the normal working hours of the court, Jerome was unable to access his bail and was remanded to the Golden Grove Prison. His attorney said he intended to write to the Commissioner of Prisons Sterling Stewart requesting his client to be kept away from the general prison population so that he would not be harmed.

Hours before his court appearance, a group of men and women sat outside the Arima Magistrates’ Court waiting to catch a glimpse, some of whom described him as “a real cool man.” Some of women, while taking sips of alcohol, criticised Marchan for giving a statement to police, while some men said there were two sides to a story and all had not been told.

One women recalled her horrors at being a victim of domestic abuse and how she worked up the courage to leave the relationship. Another said she would never be in such a relationship and if any man dare touch her she would “bathe him with hot oil after some good loving and he sleeping.”