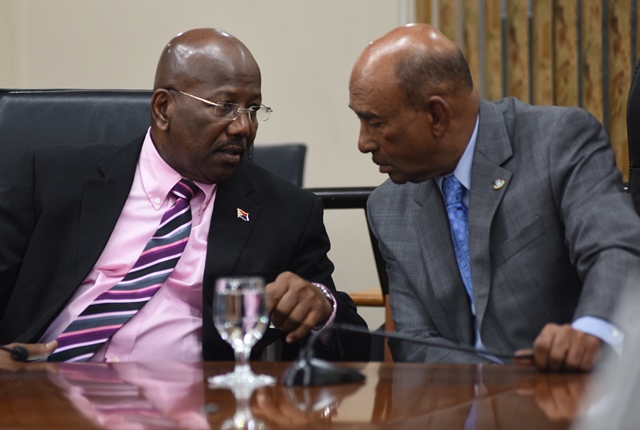 PHILIPSBURG, Sint Maarten — Prime Minister William Marlin has shot back at critics of the Chinese hotel and executive apartment development slated for Little Bay. Speaking at the Council of Ministers press briefing Wednesday, Mr. Marlin sought to explain how the project came about and cleared up any misconceptions people may have gotten from the Minister of Finance Richard Gibson’s announcement last week in a town hall meeting.

According to Prime Minister Marlin, the project was an answer to the declining economic and tourism growth St. Maarten has been experiencing in recent years. “It is different in many ways, but in terms as a construction project, it’s probably no different, probably on a larger scale than when Westin was built. And where Westin was built? On a beach,” the prime minister said.

Prime Minister Marlin clarified the perception that some one million Chinese tourists will suddenly descend upon St. Maarten when this project is completed. “(The developers) have indicated that the product that they are bring to St. Maarten will enhance our own tourism product and expand on our tourism base. The developer said to us: ‘are you aware that tourism in China is growing in China not in the sense in the amount of tourist that come to China but the amount of Chinese tourists that are traveling out to the rest of the world.

He then said we have over 100 million Chinese tourist that travel all over the world. And I said: ‘oh please, we don’t need 100 million. One million will do us quite fine,” Marlin explained. He added that the developer promised to help St. Maarten to bring in one million tourists to St. Maarten over a 10 year span.

He explained that the project is designed to make St. Maarten a hub of Chinese business activity in the Caribbean. “It’s a public/private partnership between the government of China and local Chinese business people. They have been looking for a hub where they can springboard from and operate from. By establishing it in St. Maarten that has good air connections and a good port, they figured well…we would be able to set up shop in St. Maarten and organize conventions, bring groups to St. Maarten,” Marlin said.

Meanwhile, Prime Minister Marlin disclosed that no tax holidays have been granted to the developers of the Little Bay project. He said construction will take two years and that there will be a lot of opportunities for locals to be employed. Two hundred persons will be employed during the construction. “If (developers) want to bring their main contractors in…that is there choice but in terms of the (construction) workers; workers are in abundance on St. Maarten. They have built the Westin…they have built all of the major constructions on St. Maarten,” Mr. Marlin said.

According to the prime minister efforts will be made by NIPA to offer training programs for its students so that they too can offer services to the resort and its guests when it’s completed.  Aside from visiting St. Maarten to stay at this hotel, Mr. Marlin also noted that St. Maarten can benefit from hundreds of travelers visiting the island on one flight, who will then subsequently visit surrounding islands, as has always been the case. “St. Maarten is trying to open up a new market and rather than embrace it, (the opposition) try to throw rocks at it simply because there is an election,” Marlin said.