Home 721news Matser gets candid as in discussing his calling 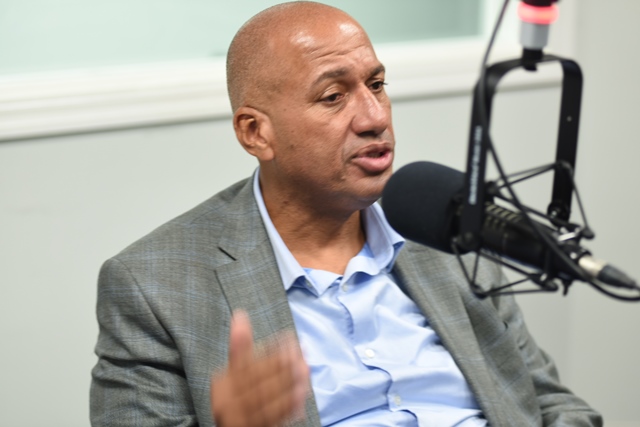 ~ Says opponents scared of what he can deliver ~

PHILIPSBURG, Sint Maarten — Member of Parliament Silvio Matser, in a very candid and personal interview on Tuesday, acknowledged that his legal troubles do worry him, his love for St. Maarten is unwavering, his political opponents fear his ability to deliver and his choice to contest the September 26 elections with the United St. Maarten Party (USP) was based in large part on consistent leadership.

Matser appeared on the Breakfast Lounge on PJD2 with host Lady Grace and addressed a range of issues including primarily the amount of soul searching he had to do before deciding to contest another election. In the end, he stressed, the decision was made when he asked himself one simple question: “what has my country done for me?” The answer was plenty.

“I am human like everyone else. I get nervous, I get worried. You get up in the morning to go to work and you see your name in the papers and you get that tight feeling in your stomach. But all I do is say God please give me strength and I move on. This country has given me and my family a lot. I decided to run because I wanted to give back to my country and my people. I will not sit back and let a storm stop me from bringing light to others,” he said.

The MP added that whether the scheduling of his legal cases was done to coincide with the elections is not something that will stop him from being himself.  In 2014, he continued, when he ran on a list for the first time after supporting many parties, many people did not expect him to get the 495 votes he obtained.

“Everybody saw me for the first time on a list and some was shocked with the numbers. But people don’t understand that through my construction business with so many workers, I have helped so many people over the years. I have touched so many families. Guys that came out of prison and had a police record who nobody else wanted to help or give a chance at a job, those are the people I’ve helped not to mention so many others. It’s what I do,” he said.

The MP added that many of his opponents are scared or intimidated by him because they know people will eventually see that he is not the person they portray negatively. “I am not the person as described. I get a lot of people saying hey, you are different than they say once they get to know me. I am a Middle Region man, I’m not an intellectual, I speak plainly, don’t ask me to sound like an intellectual. I am not that person. But I can get the job done anyway. I focus on what my calling is and that is to make St. Maarten a better place,” he said.

In the same breath he said the story about him leaving the UP party has two sides and people should not believe what is being spun from one side. Matser said the UP leader should finally soul search and see where he went wrong that so many followers have decided to leave his party.

“If you don’t communicate, things will fall apart. That is your role as a leader. Don’t blame the rest of the world. I didn’t jump ship, I abandoned ship. I’m not the band like on the Titanic.  I’m not gonna keep playing, I wasn’t going down with the ship. I jumped into the life-raft and told my people to get onboard because they had no clue that the captain saw the ice berg and kept going straight at it,” Matser said.

Turning to the leader of the USP, Matser described MP Frans Richardson as a “consistent man” with whom he has had a long open relationship. “We communicate a lot and we argue alot. And when we are finished we sit like old school friends, laugh and admit where each was right and wrong. He calls all of us to discuss issues to ask us what we think about this and that,” he said. “In fact we talked so much in Parliament I used to say that Frans is more my leader than my then leader in Parliament.”

MP Matser also used the opportunity to praise Minister of TEATT Ingrid Arrindell for doing a lot in a very short period of time and says he looks forward to seeing the Ministry do more in the coming weeks and beyond. He stressed that much has to be done to elevate the “small man” to middle class status starting with issues such as tax reform and other initiatives to “put money in the pocket of the people.”

He also made mention of the necessity of a hospitality school and lamented the fact that St. Maarten has turned away from a sector (hospitality) upon which modern day St. Maarten was founded. “We were known as the friendly island and focused on good service. How did we manage to turn away from this,” Matser questioned.

Bureaucracy he said, is stifling St. Maarten. “It’s like you can’t do anything for anyone, anymore. St. Maarten was not built on this kind of Bureaucracy. You can’t even call somebody to help somebody out anymore. Everything is red tape and formalities. When people come to St. Maarten to invest they come here for tranquility and do not expect the amount of red tape they face. They either gets turned off or leave. We will lose what we have this way,” he said.

The drama surrounding the appointment of Rolando Brison as the first ever Director of the St. Maarten Tourism Authority, Matser said, “troubled me very deeply”. He explained that although some people made an issue of him being in the picture with Brison and Minister Arrindell, he said it was just a matter of coincidence.

In his capacity of an MP on Parliament’s Economic Committee, Matser explained that he was in the Government Administration Building on a different matter when he was called in to see history in the making. “I even questioned if it was a good idea and everyone was like why not, you are a representative of the people and here we had a young St. Maartener making history. So the picture was taken and I was happy they selected him,” he said.

“Now I have to ask, when are we gonna stop destroying our young people. If the situation was so bad why didn’t they charge him years ago. He told me but MP, this situation was settled with Winair almost 5 years ago. But no, it’s an election year and some people want to keep control so here they come bashing and destroying the young man.”

“The ‘kid’ is in his prime. He has a two-month trial period and we all know he is dynamic and one of the best when it comes to marketing. His report from the selection committee shows him outscoring the other candidates 10 to 1. I will stick with him through thick and thin. I say let the process and vetting play out and stop destroying the young man because If we open Pandora’s box on some individuals, people will be shocked about what is going on. I told the young man that these are the type of storms that those who refuse to give creates.

“We are supposed to be a forgiving nation. That is our corner stone. What message are we sending to young adult? To come back home so we can destroy you because some people desperate to hold on to power. Destroying a bright, young local will not happen not under Silvio Matser,” the MP concluded.

Source: 721 News Matser gets candid as in discussing his calling