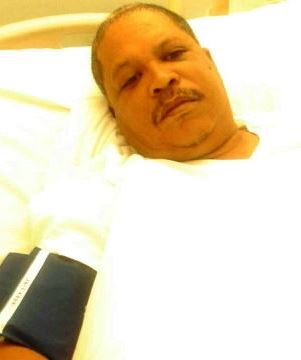 Here is Officer Ranis in his bed at SMMC, a picture he provide us to show he is busy recuperating. PHOTO 721news.com

CAYHIL, Sint Maarten — In a interview with 721news, injured Police Officer Ranis would like to thank everyone who had him in their prayers.

He told our newsroom that he is doing much better although he has to deal with the fact that his life has now changed as a result of the loss of his left leg during an accident with his Patrol Bike. He confirm to us that he has had up to 3 operations on his left leg whereby the doctors had to amputate it under his knee.

He still has to do another major operation to his hip, because it was fractured during the accident. He was not sure when but sometime this week he will be going to the french hospital to do that operation.

Ranis became a police back in the Netherlands Antilles days on May 1st 1996 and was transferred with his family to St Maarten back in 1998. He has been a Officer stationed in st Maarten over the past 17 years and has been a member of the Police Force for almost 20 years.

We have to say that our Photographer/reporter Gromyko Wilson has been a friend of his since he was living in Curacao. Ranis was a school mate of Gromyko’s sister and a friend to his family over 20 years.

When we ask him if he saw the video of his accident, he told our news room yes and was sorry to see the commotion that took place after.

He thanked all his colleagues in Sint Maarten, Curacao BES and Aruba who contacted him after they were notified of the accident.

in a closed statement to our news room he stated, “He hope to have a soon recovery so that he can get back to work and do what he loves the most “.

Source: 721 news Mayor Ranis thanks everyone who had him in their prayer