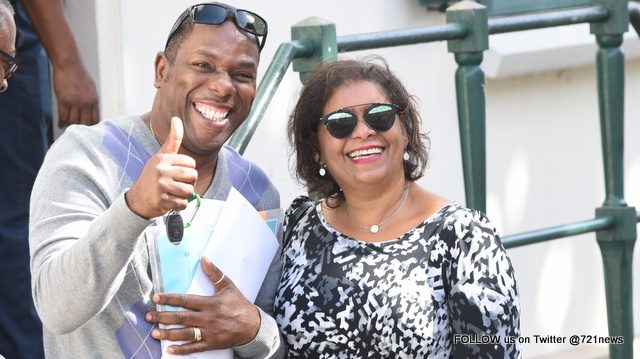 GREAT BAY – Michel Carty was all smiles when he left the courthouse yesterday morning, after Judge J. Sap had ruled in his favor in a labor dispute with Insel Air. The court ordered the airline to continue paying Carty’s salary from February of this year until the labor contract has ended legally and to pay 2,100 guilders for the costs of the procedure.

On March 7, 2015, SVB stopped paying the sickness compensation for Carty to his employer.

On October 26, 2015, Carty was found to be permanently unable to work as a flight attendant by the company doctor. In a letter to Insel Air however, the doctor indicated that Carty would be able to do other work on the ground.

In November Insel Air sent out an internal message asking if there was any other position available for its employee. The responses came back negative.

On December 8, 2015, Insel Air introduced a vacancy stop due to disappointing business results and the decreased number of flights to Venezuela.

On January 29 of this year, Insel air offered Carty an agreement that would terminate his employment per June 30 of this year; Carty refused and Insel Air stopped paying his salary per February 1.

The court ruled that Insel Air had not behaved as a good employer, especially because Carty had indicated that he was willing to move back from St. Maarten to Curacao for his job. “The circumstance that Carty currently is not working just be seen as a hindrance that comes for the account of the employer,” the court ruled.