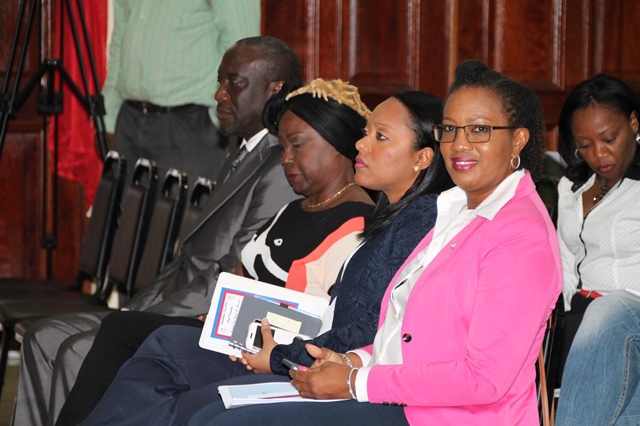 CAY HILL – On October 9, the Ministry Education, Culture, Youth and Sports organized its second event to bring about the “Revitalization of our Natural and Cultural Heritage” whilst commemorating Constitution Day in the form of a panel discussion at the Belair Community Center.

The aim of the panel discussion was to inform the general public about Parliament and the Constitution while providing those in attendance the opportunity to pose questions and receive answers from the panelists.

Panelists included Secretary General of Parliament Nancy Guishard-Joubert, who gave a thorough explanation of the role and workings of Parliament. Other Panelists were Dr. Nilda Arduin-Lynch, Dr. Rhoda Arrindell and Julio Romney, who joined Guishard-Joubert to answer questions posed by moderators Rolando Tobias and Darren Wilson as well as several from the audience. The dialogue was interesting, thought provoking and a great lead-in for further dialogue and action in the near future.

Minister Silveria Jacobs opened and closed with words of encouragement and committed to the promise to keep the public involved in the decisions needed to move St. Maarten forward, while recognizing “our identity as St. Maarteners, a national anthem, as well as protection of its history and legacy.”

Questions raised highlighted the need for more information to be shared with the general public on the constitution, while highlighting key areas that needed to be amended. Minister Jacobs looks forward to even more public participation in future discussions, which will lead to decisions on these key elements as related “to our cultural heritage and national identity.” She also thanked all those who made it possible within the Ministry as well as all other stakeholders, moderators, panelists, technical support, caterers and the audience.

An edited version of the Panel Discussion is scheduled to be aired this Saturday, October 22, on SXM Cable TV Channel 115 from 8:00pm-10:00pm. A digital version of the panel discussion is available via video on demand on the Government website (sintmaartengov.org) as well as its YouTube channel for those who missed it.