Home 721news Minister Jacobs: We have to value persons for their contributions 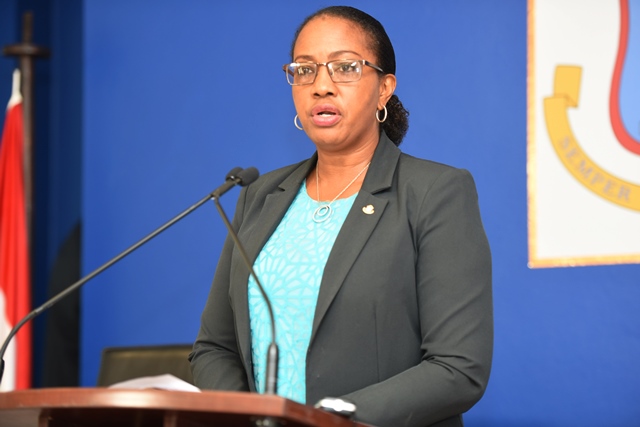 She first thanked all who contributed to the tributes for “our fallen soldier Mr. Neville York, cultural icon of St. Maarten, who passed away last week and was laid to rest yesterday.”

“Last Saturday we held the wake/musical artist concert, which was very uplifting to the family. So I’d like to thank all who made that possible within the Culture Department itself, his staff, the Ministry of Education, Culture, Youth, and Sports as well as to all the artists who took it to heart to come out and pay tribute to him on both days,” Minister Jacobs said.

She further informed that “as government we will be continuing to highlight the achievements of several icons. We have started already over the past years with sports and in culture, and we’ll extend it also to the education field, but we require assistance in gathering information. A lot of organizations have been doing things for many years and in this light I implore you to send in your information in terms of persons or achievements of the organization to the Department of Sports if it relates to that, the Department of Culture when it relates to that, and to the Department of Education as we have the Innovations Bureau and Project Management team, who with the changes that we are making within the ministry, are being charged with actually carrying out our events.”

She also emphasized that, “The loss for the Ministry cannot be even explained and several people are asking me what are we going to do now and to tell you the god awful truth, we have to get together as a Ministry still and regroup in order to see how we will move forward from here.”

She said that two departments in her Ministry “have taken a blow with the Heads of Departments…So we are feeling the brunt of this now over the past two years, and this only compounds it further. We have to value individuals for the contribution they make.”

However, despite the “continued cry of financial constraints, which dampens and diminishes the dreams and goals of many especially within the organization, I ask you to stay focused, to stay encouraged because this year we had quite some plans where execution would have been made possible and I look forward to see how we can creatively and innovatively still achieve all the goals we had for 2017 and beyond.”

She mentioned that the Division of Exams and Inspections remained open during York’s funeral “because…these two departments could not close as FBE Exit exams had started yesterday and they had to remain available.”

FBE Exit exams started on Tuesday, May 16. However, there seemed to have been an issue with scheduling.

“What was on the schedule for yesterday happened, but in perusing some complaints on social media and investigating last night, it was brought to my attention that the exam that was scheduled for today basically, had the same name as the one from yesterday, and so some schools thought that the Science exam of the General Knowledge portion was yesterday, and so some children were a little annoyed, upset as well as schools and teachers and parents. So we acknowledged that this indeed was an oversight on the part of the Ministry, but also on the part of the schools,” Minister Jacobs explained.

“We have to take responsibility, all of us, for this type of a mistake. The schedules were disseminated since December, and it was not caught in time to make the changes, so the schedule that went off yesterday was the one that was originally on the schedule,” the Minister continued.

“If there is any type of a discrepancy, I implore the schools to take the necessary steps to report in time. Also once you’re sitting the exams, there is a process by which complaints can be lodged. If any discrepancies within the exams or within the procedure, within anything related, it is noted and so the school has a responsibility to then report to Exams in writing via the forms that have been submitted,” Minister Jacobs stated.

According to the Minister, the Division conveyed to her that no discrepancies had been reported, “But I would implore the schools and their representatives to make sure to send in the process verbal so that we can take the necessary steps as a Ministry to address any and all issues related to these exams.”

She reminded parents, teachers and students that “these exams are a cumulative of four years of preparation minimal. It’s not only what you have studied over yesterday, today or last week. We have been preparing you over the years and I understand emotions come into play, so as parents and teachers and schools in this case, we must prepare our children also to handle adversity. We must prepare them to understand that things don’t always go the way that we planned for them to go, and to be ready to deal with it on an emotional as well as a physical level.”

She also mentioned that she had visited the public schools that fall directly under her, last week and up to Monday, “to mainly encourage students to do their best in these moments.”

Minister Jacobs again wished them much success in these exams, however, she noted that “it is but one moment in time and the rest of your life is ahead of you to readjust your compass, to move forward in the direction in which you are planning to go.”