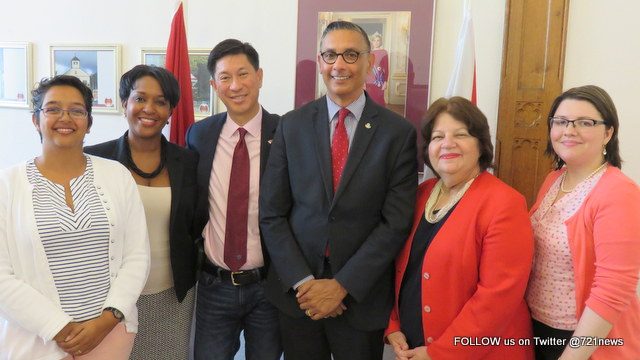 In the absence of Minister of Plenipotentiary Henrietta Doran-York, who is presently on a working visit, Minister Lee was received and welcomed by Director of the cabinet Perry Geerlings. Minister Lee was given a tour and orientation, where he was introduced to the staff, and enlightened on their function and specific fields of expertise.

The staff members introduced were: Acting Protocol and PR Officer Margie van Gijn; Finance and Economic Affairs Carol Voges, who also acts as representative on the board of OCTA in Brussels; Personal advisor to Minister of Plenipotentiary, next to her portfolio of Education and Cultural Affairs Kelly Busby; Director in charge of the day to day affairs at the Cabinet Perry Geerlings, who is also main advisor to the Minister of Plenipotentiary in her preparation for the Kingdom Council of Ministers meeting.

Furthermore, the Director is monitoring the (political) developments within all Ministries in the Netherlands, which might have consequences for St. Maarten. Absent at that meeting were staff members, Javier Badaracco, in charge of administrative support and archive and Maarten van Rooij, who is in charge of the Legal Department.

During the working visit, Minister Lee also met with two members of the SZV management team, who are currently in the Netherlands to attend the e-Health week. Chief Operations Officer Ramzy Dennaoui, and Chief Customer Officer Parveen Boertje, discussed briefly the intermediate role the Cabinet of the Minister Plenipotentiary fulfills for St. Maarten pensioners residing in the Netherlands, as well as the role the Cabinet could play for customers SZV refers to the Netherlands for medical treatment.

Minister Lee stated, “I am impressed with all that St. Maarten house is doing. As St. Maarten works towards a new Medical Center and health care reform, the Cabinet of the Minister Plenipotentiary in The Hague has a critical role for the Country St. Maarten in keeping the Netherlands informed where it concerns the local developments on the island and our Government as well as informing St. Maarten of the latest trends and developments in all areas of Government and the social landscape of the Netherlands.”