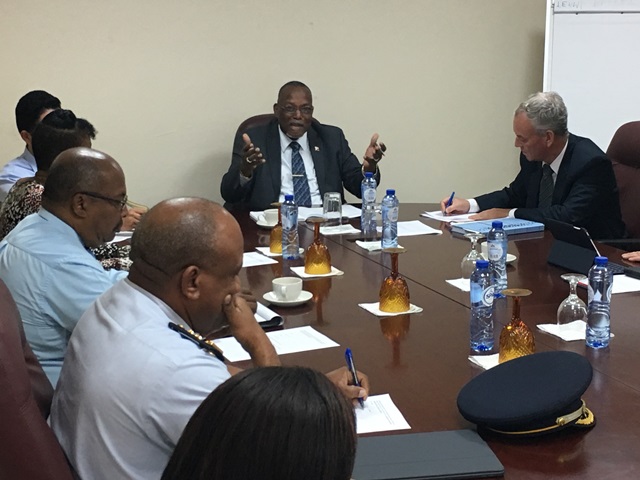 PHILIPSBURG – On Thursday, January 19, Minister of Justice Rafael Boasman met with the heads of the various departments that fall under the Justice ministry.

Present at the meeting representing their departments were: Rueben Thompson, Secretary General of the Ministry of Justice; Lucy Gachette of the National Detectives (Landsrecherche);  Robert Barbij of the Immigration Department; Carl John from the St. Maarten Police Force (KPSM); Richelda Rodriguez-Emmanuel of the Court of Guardianship (Voodgijraad DJZV); Edward Rohan from the Pointe Blanche Prison Facilities; Anthony Doran from the Customs Department (Douane); Vidjai Jusia from the Department of Judicial Affairs (Judiciele Zaken); Ligia Stella from MOT; Richinel Martina from the Miss Lalie Center; and Ton Maan from the Prosecutor’s Office.

The Minister, accompanied by his Cabinet Chef Levinus (Len) Dijkstra, outlined where he intends to take the Justice Ministry and asked for the full cooperation and support of the department heads and their staff in order to realize the goals set.

He urged each department head to be prepared to take full responsibility for the running of their respective departments.

During the meeting, the Minister expressed his concern with the current situation at the Pointe Blanche Prison and pledged to place addressing these matters at the top of his list of priorities.

Other matters affecting the ministry, such as immigration, customs and the Prosecutor’s Office, were discussed.

Before ending the meeting, the Minister thanked the department heads for participating and sharing the pertinent information, and mostly for the cooperation they pledged to give the Minister in his endeavors to improve the justice system in general. The attendees expressed their appreciation for the meeting and felt that such meetings are vital for the running of the Ministry.

Minister Boasman will provide further detailed information coming out of the meeting at the upcoming weekly press briefing on Wednesday.