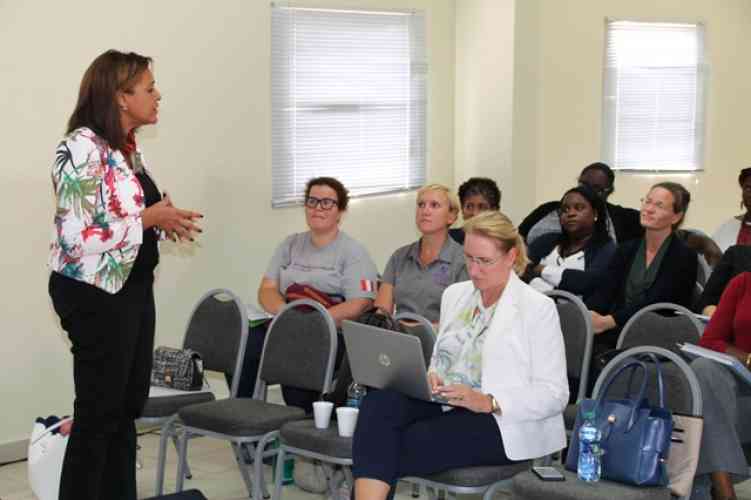 PHILIPSBURG – On Friday February 23rd 2018, Minister of Education, Culture, Youth and Sport, Jorien Wuite, hosted a follow-up stakeholders consultation session to give a report on the progress of the execution of the Ministry’s Resiliency Plan (MRP).

The   plan,   formulated   in   collaboration   with   UNICEF representatives,   Ministry of Education, Culture, Youth and Sport (MECYS) Policy Department   Heads and   the policy   advisor of the Staff   Bureau, in response to the devastation caused by hurricane IRMA, has as its main objectives:  to establish a foundation for a sustainable recovery plan and to improve disaster responsiveness before, during and after disasters in the education, culture, youth and sport sector. This document provides a roadmap for the Ministry on the way forward.

The first follow-up consultation session was held on the afternoon of January 15th.  At the conclusion of that meeting a follow-up session was promised and Minister Wuite saw it fit to host this meeting as the last meeting held during her much focused first half of her interim term.

At the meeting, stakeholders received an update from the Ministry on progress made to date in securing priorities for funding via the World Bank established with money made available from the Netherlands. Ongoing meetings continue to be held between the Ministry and World Bank representatives in an effort to complete St. Maarten’s National recovery Plan and prioritize projects that focus on recovery.  The Ministry has submitted the highest priorities for immediate funding to a value of approximately 1.4 million guilders for urgent school repairs, support for mental and overall wellbeing, retraining and vocational programs, urgent repairs for Fort Amsterdam and the temporary location of the library.

The Minister also highlighted some of the presentations received in individual consultation meetings with stakeholders. The Seventh Day Adventist, St. Maarten Academy, SVOBE (MPC and Sundial) and Catholic School Boards as well the Philipsburg Jubilee Library were highlighted for the progressiveness of their plans for more resilient schools that fit 21st century learning and a need for re-zoning priorities to alleviate the concentration of schools in one area .

The Minister also gave an update regarding the disbursement of government’s insurance policy via Nagico.  Currently all MECYS institutions are insured under one government umbrella policy; while this may lead to lower insurance premiums the Minister has expressed her concern with the length of time of the distribution of funds as she worries that institutions may not have the necessary amount of time before the next hurricane season starts to make necessary repairs.

To this end the Minister has presented an advice to the Council of Ministers requesting permission to look into the possibilities of institutions undertaking their own policies.  This would especially be helpful to the institutions that own their buildings as a speedier payout process can lead to a faster repair or rebuild of damages. The Minister intends to start talks with the relevant groups this week to further explore options the St. Maarten Government and the MECYS ministry in particular may have.

Minister Wuite ended the meeting by assuring those present that communication and further consultations would continue between the stakeholders and the Ministry.