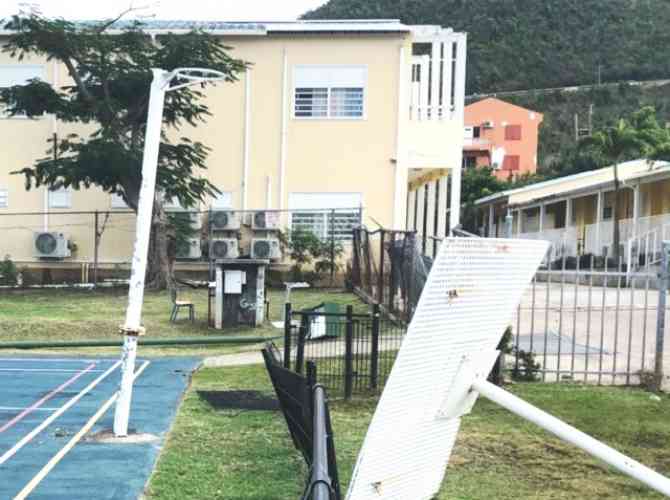 PHILIPSBURG, Sint Maarten — In line with the vision of recovery, Minister of Education, Culture, Youth and Sport Jorien Wuite informs that repairs to the Melford Hazel Sports Center along with several basketball courts in various districts on the island have been signed off on to be executed within the coming weeks. The National Sports Institute (NSI) will be the executing agency to oversee the repairs with funds made available through the approval of a subsidy by the Government of St. Maarten

The Melford Hazel Sports Center, an indoor and outdoor sports facility, suffered major damage after the passing of hurricanes Irma and Maria in September 2017. After a damage assessment was performed by the NSI it was reported that the roof of the facility had several holes, the basketball and tennis fields on the property were destroyed as well as the on-site playground. Iron gates and fencing surrounding the property were also destroyed. The first phase of repairs to the complex will concentrate on the main building making it available for use. A second phase to start at a later date will cover the repair of the outside gazebo used by the general public for sports and other events.

Six basketball courts are also slated for repairs. They are the courts located in Cole Bay at the Leonard Connor School, Dutch Quarter at the Martin Luther King School, Middle Region at the Sister Marie Laurence School, St. Peters at the Rupert Maynard Community Center, Simpson Bay at the Sister Regina School and Belvedere by the sports field.

These six courts provide a location for youth to engage in play within their local communities. With the repairs of these basketball courts, as well as the Melford Hazel Sports Center, Minister Wuite looks forward to these communities being one step closer to returning to our “new normal”. “Once children are safe and engaged in school, sports and after school activities it encourages family life to return to normal; parents and guardians can then turn their attention to other critical priorities” the Minister explained.  The Minister also complements the NSI, Sports Department and private volunteers for their proactive and committed efforts as additional repairs to the island’s sports facilities have already commenced. Major damage was reported at the majority of the sporting facilities on the island after the passage of the two hurricanes.