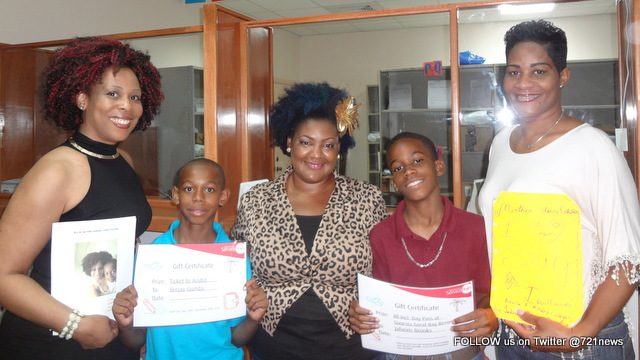 PHILIPSBURG – In an attempt to promote writing skills within the schools, Soualiga Service Point/Punto Mio created a campaign that would directly involve the scholars, their teachers and their parents.

This year for their Mother’s Day campaign, Soualiga Service Point/Punto Mio decided to create a promotion that would enable students of primary schools to participate in an essay competition titled: “Why My Mom Deserves A Dream Vacation.”

The criteria explained that students had to submit a 300-word essay, where they would highlight and explain why their mom deserved a vacation. The essay would then be collected and judged by Soualiga Service Marketing Team, where the winners would be chosen based on expression, formulation, and sentimental aspects.

Two schools that participated were: the Methodist Agogic Centre (MAC) and Sr. Borgia Elementary School. “Students that participated definitely made the effort to put in writing why they felt their mom should be the chosen one,” the release continued.

During the 3rd week in May the winners were selected. First and second prizes both went to MAC students Jaheim Brooks (1st prize) and Teejay Gumbs (2nd prize). Brooks won his mom won a trip to Aruba, and the 2nd prize mom won a Day Pass All-Inclusive at The Sonesta Great Bay Hotel.

Soualiga Service Point was happy to be able to surprise these two hard working moms. Their children wrote about the sacrifices they make to ensure that their children have what they need financially, morally and spiritually.

Retail and Marketing Manager Kenty Lichtenberg expressed gratitude to the schools for allowing this campaign to be part of their extracurricular activities. She also took the opportunity to emphasize to parents the importance of being a part of their children’s academic developments. “It is very important to understand that there needs to be direct collaboration between parents, students and teachers in order to generate positive academic results,” she concluded.