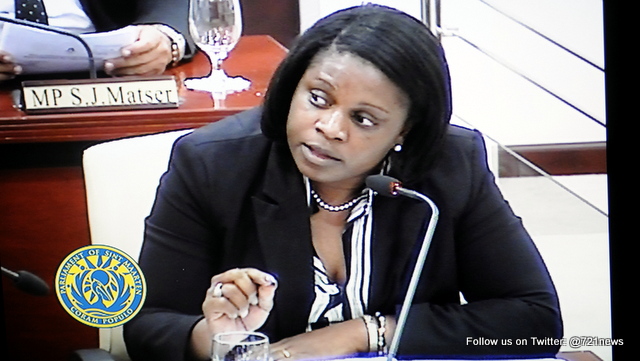 PHILIPSBURG—Honourable Independent Member of Parliament MP Leona Marlin-Romeo has expressed serious concerns over the level of security and effectiveness of present controls at borders for Country St. Maarten.

MP Marlin-Romeo said “As a small island we have to be cognizant of our capacity and who is in our Country.” This must be approached structurally and should include further education for law enforcement agents on border control. This area of focus requires the drafting of proper legislation to amend existing laws for even greater relationships between the French and Dutch as well as it requires proper use of technology and investment in equipment to ensure effective control.

She said she would be looking seriously at possible legislations strengthen the reach of authorities where policing the country’s borders are concerned.

MP Marlin-Romeo, who is contesting this year’s Parliamentary Elections as the number 6 Candidate on the United People’s Party UP Party slate, said Sunday, Government must do more to ensure that there is a clear picture of persons moving through our borders.

She said this must be strict but should be executed without any discriminatory tactics. With the gaps in the system such as and lack of proper tools for greater air land and sea surveillance, the concern for the MP extends beyond persons entering unchecked to illicit drugs and weapons reaching our streets. She said, “Security and border control is very important because we ought to know who and what is actually entering our country.”

Other concerns expressed by the MP included the need for a renewed approach to achieving sustainable economic and social development of St. Maarten. Calling the economic situation at present “sluggish” she lamented the increasing cost of living, inadequate pension for retirees and elders, high unemployment and increasing insecurity within our various communities, as areas where not enough attention has been given.

She said there must be greater strength in leadership and while the best approach to restoration of the economy may include unpopular decisions, once they are sound decisions that yield the intended results, there should be no hesitation in delivering the solutions to a dying economy.

MP Romeo-Marlin has been looking closely at the lack of improvements in our Economy, Security and Border Control, Education and Unemployment. One of the concerns regarding the economy is the existence of growth only amongst 10 to 15 percent of the population while the remainder suffers severe loss of spending power, decreased quality of living condition and decreased access to proper housing.

MP Romeo-Marlin was also critical of the education system at present It is her intention to propose new legislations to revamp the education system and strengthen the curriculum to allow children a greater chance of being prepared for the next chapter in their lives after school on St. Maarten. Regarding unemployment, of grave concern is the high number of youths that make up the overall unemployment number.

At present 9 percent of the islands population is unemployed and of that nine percent 26 percent are youths or young adults. MP Romeo-Marlin said “This is unacceptable for our economy that has so much potential.

“Hence, it is my intention to propose the right legislation and motion that will enable our current unemployment pool be trained effectively and efficiently so that they can become employable and more so to the point where they can also think entrepreneurial.”