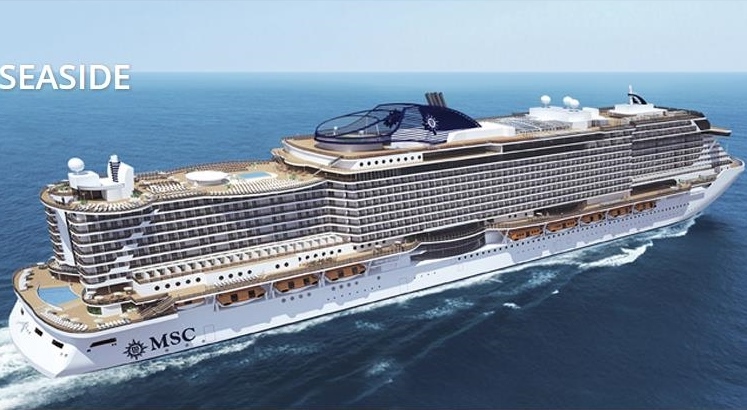 In December 2017, Port St. Maarten will receive the inaugural call of MSC Seaside, which is part of the new Seaside Class described by MSC as a game changer that will feature a promenade with shops, restaurants and bars.

MSC Seaside will lead the way for a new generation of cruise ships with their revolutionary architecture and cutting-edge technology followed by the 1st and 2ndgeneration ships.  MSC Seaside will be the first ship in the MSC Cruises’ fleet to be christened in the United States, and thereafter will be sailing in the Caribbean year-round from Miami’s port.

MSC Seaside, will have a gross tonnage of 154,000 tons; 4,140 passengers and 1,413 crew; will be launched in November 2017, MSCs Seaside will be calling at Port St. Maarten on a seven-night Eastern Caribbean itinerary.

Port St. Maarten Management while continuing to work on increasing cruise passenger numbers, the results can be seen with the increase in calls from MSC Cruises for 2017 which would make up for the losses of other lines that the destination experienced in 2016.

MSC Cruises is making considerable investments in constructing Future Larger Vessels (FLV).  The two-next generation ships are the largest ships ever to be built for a European cruise line and the second largest globally.

MSC Cruises is constructing 11 new next-generation cruise ships that will come into service by 2026.  The “Meraviglia-Plus” ships are a further evolution of the “Meraviglia” class prototype, increasing their GRT (Gross tonnage) to 177,000 with 2,450 guest cabins. The first of the two identical “Meraviglia” class ships that is currently being built will come into service in 2017, featuring 167,000 GRT and 2,250 guest cabins.

The MSC Cruises “Meraviglia-Plus” class is the next-level generation of ships for all seasons. At 331 meters-long and with the addition of 200 extra cabins, the two ships will feature a maximum capacity of 6,300 guests. Thanks to their highly innovative maritime technology – an MSC Cruises core focus –, together with their “Meraviglia” class sister ships they will be the only ones in their class able to call at all world cruise ports.

“Port St. Maarten must be ready to accommodate the next-generation cruise ships that are currently under construction or will be built in the foreseeable future.  We need all stakeholders to be onboard to be able to make those strategic investments to protect our cruise tourism product and our economy.  We plan to visit executive management of MSC Cruises early this year to further nurture our strategic partnership and secure additional business well into the 21st century,” Port St. Maarten Management pointed out on Sunday.

The first new ship of MSC Cruises will be MSC Meraviglia with a gross tonnage of 167,600 tons and carrying 5,700 passengers and 1,536 crew members.

MSC Cruises which grew by 800 per cent since 2004, carried 1.67 million guests in 2014 and reported strong financial results with a turnover of 1.5 billion Euro.  In addition, MSC Cruises forecasted an additional 10 per cent growth in 2015.  The cruise line employs 15,000 staff members around the world and is present in 45 countries.

MSC Cruises has a fleet of 12 ships.  In 2014 MSC launched an investment plan to support the second phase of growth and in April 2016, the cruise line ordered additional vessels for a total investment of nine billion Euros for up to 11-new next-generation ships which will come into service starting in 2017 to 2026 making the cruise line the third largest.